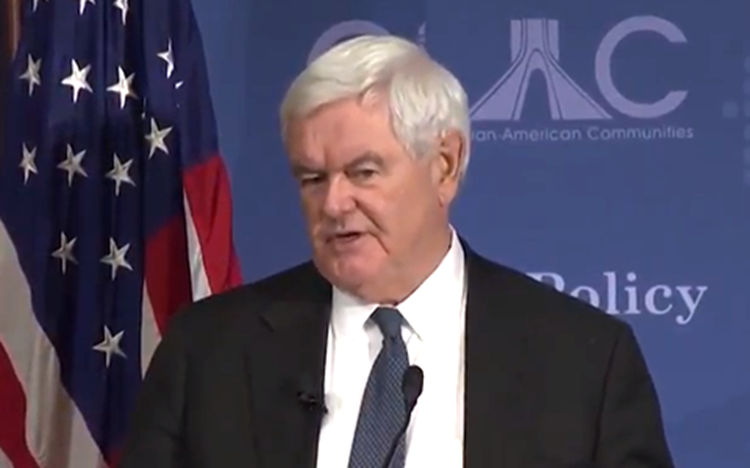 London, 24 Oct – When he described the clerical establishment of Iran as “a dictatorship with a façade of democracy,” former House Speaker and Presidential Candidate Newt Gingrich added, “If you’re not part of the dictatorship, and you’re not acceptable to the dictator, you can’t run, and therefore to pretend that the elections actually offer any serious choice to the Iranian people is simply a fantasy.”

Gingrich made these comments while speaking at a luncheon held by the Organization of Iranian American Communities, OIAC at the National Press Club in Washington, DC, on Friday. Ambassador Lincoln Bloomfield Jr., the Assistant Secretary of State for Political Military Affairs under the George W. Bush administration.

Gingrich also emphasized, “As long as that dictatorship is in power, as long as it’s able to spend money, as long as it is able to project terrorism around the world, it is ultimately a mortal danger to the United States. And of course, it was a terrible thing for the Iranian people. A dictatorship which in 1988 killed 30,000 people. They’re surviving by sheer repression. It is a fantasy to suggest that the dictatorship would survive without repression.”

Gingrich underscored that with the inclusion of the Islamic Revolutionary Guard Corps in the Treasury Department’s list of Specially Designated Global Terrorists (SDGT), the Treasury Department has “the potential to really dramatically weaken the IRGC if they could apply the resources to it and if they’re tough minded and extend it to all the institutions. The IRGC is a large part of the Iranian economy, and if in fact we’re serious about isolating them and restricting them we’re going to have a huge impact that ripples back to the entire Iranian economy.”

Gingrich noted that he has been working with the Iranian opposition ever since he was House Speaker. He said, “The Iranian dictatorship ran a false flag operation to set up a totally phony designation which the State Department and bureaucracy went along with. So, for a long period of time we were willing to listen to the dictatorship while not listening to the resistance, even though the resistance was trying to tell us the truth about the dictatorship which was lying to us.”

Speaking about the future direction of U.S. policy, Gingrich stressed, “I hope that this administration will now as part of this process of beginning to unravel both the IRGC and then ultimately the dictatorship, will reach out [to the source of that information in a much more collaborative way to coordinate information and to coordinate advice and find ways to work together. The National Council of Resistance of Iran has a tremendous potential, and [NCRI President-elect] Mrs. [Maryam] Rajavi has done an amazing job of leading an organization through a very long, very difficult period. And I would hope that at some point in the near future that she would be given an invitation to officially visit the United States, and have a chance both to meet with American leaders in Washington, but also to go around the country.”

When Ambassador Bloomfield asked if the NCRI is a viable opposition to the clerical establishment of Iran, Gingrich responded, “I would say anybody who has any doubts should go to Paris for the annual meeting of the worldwide organization and look out at 100,000 people and look out at representatives from 40 or 50 different countries who show up, elected officials and former elected officials literally from dozens of countries you’d never expect. And ask yourself, you know, why is it that this is the most vocal, the most energetic, the widest spread resistance to the Iranian dictatorship. And I don’t think anybody even comes in second in terms of scale.”

Reuters: Iran has given Royal Dutch Shell and Repsol...