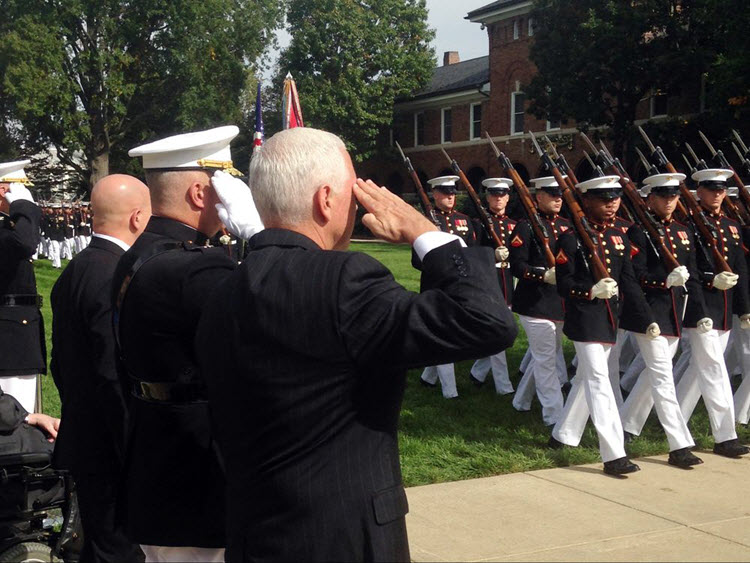 London, 24 Oct – US Vice President Mike Pence and National Security Advisor General H.R. McMaster both addressed a Washington D.C. ceremony on Monday, which marked the 34th anniversary of the attack on the US Marine Corps barracks in Beirut, Lebanon, and highlighted the Trump administration’s commitment to defeating terrorism.

The 1983 attack, in which a suicide bomber drove a truck full of explosives in the barracks, was ordered by the Iranian Revolutionary Guard Corps (IRGC) in order to get the US to pull their Marines out of Lebanon.

In response, President Ronald Reagan ordered the USS New Jersey battleship, stationed off the Lebanese coast, to bombard the hills near Beirut.

It came just months after the suicide bombing at the US Embassy in Lebanon and the two attacks are often seen as the beginning of radical Islamist terrorism against the US.

The Marines were pulled out of Lebanon shortly afterwards and the US created the Diplomatic Security Bureau and issued new guidelines for US posts across the world.

McMaster said that he honoured the US service people who were killed in the deadliest surprise attack on Americans since Pearl Harbour on the orders of the IRGC.

He said: “Those who fell in Beirut and on 9/11 must ever remind us of our grave responsibility to defeat the terrorist networks that continue to destabilize the Middle East, brutalize people and attack civilization.”

He continued: “Whether at the behest of the Islamic Revolutionary Guard Corps or al Qaeda or ISIS, these groups are all the enemies of humanity of all peace-loving nations.”

While Pence reaffirmed the US’s commitment to eradicating terrorism, as seen in Trump’s decertification of Iranian compliance with the Iran nuclear deal.

He said: “I say with confidence under this Commander-in-Chief, the armed forces of the United States will have the support they need to confront our enemy and win. Radical Islamic terrorism is a hydra with many heads striking London, Paris, Barcelona, no matter what name they choose to go by or where they try to hide, this president and our armed forces are committed, as the president said in his own words, to destroy terrorist organizations and the radical ideology that drives them, and so we will.”

He then labelled Iran as a haven for terrorists and terrorist activity.

He said: “President Donald Drumpf has put Iran on notice that we will no longer tolerate their destabilizing activities or their support of terrorism across the region and across the world.”

He continued: “Iran’s theocratic rulers aided and abetted the Beirut bombers 34 years ago and even now, Iran praises the attackers and remembers them as martyrs. And worse yet the Iranian regime continues to funnel funds and weapons to its terrorist minions with the goal of shedding blood and sowing chaos throughout the wider world.”

AKI: A man known as Sharif has reportedly stoned...

U.S. not planning for war with Iran, Gates says

Reuters: The United States is not planning for a...