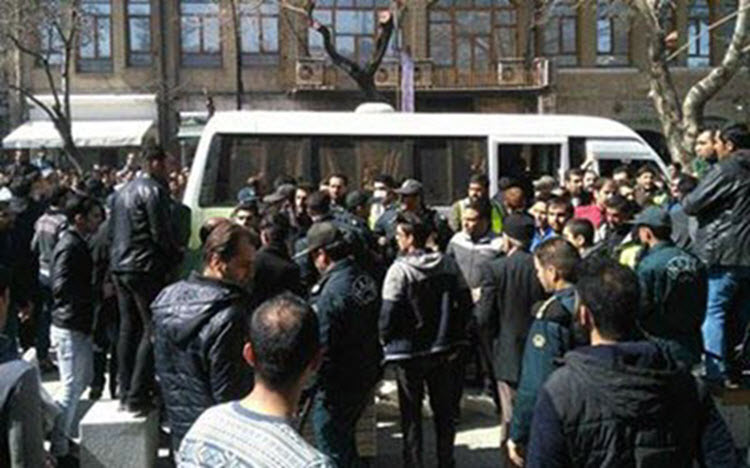 London, 23 Oct – Tehran. October 23, 2017. More than 2000 looted customers of IRGC affiliated financial institutions demonstrated in front of the parliament, security forces who were trying to disperse them with mayhem faced a strong resistance. People were chanting:

Protestors chanted: “Shame! Shame on the police force! “,”Cannon, machine gun, tank no longer works”, “death to the dictator.” When the police arrested some people, especially women, and wanted to take them by force, people chanted “You ISIS, you ISIS, death to ISIS, let them go,” “Police, shame on you, let our fellow citizens go.”

Some of the slogans were: “Death to Saif (head of the Central Bank)”, “Shame on Rouhani”, “Larijani is apparently the judge but a thief’s accomplice,” “Theft is institutionalized, the hearts are full of hatred,” “For traveling to other countries, they have taken our money “,” They had a budget deficit, but they have taken it from our money”, “Caspian institute has stolen, the government has supported it”, ” Saif betrayes, Parliament confirms”, ” I will not give up unless I get my rights”,” Injustice is enough”, …

When a number of participants in the demonstration including women were attacked by police forces, other people in the scene joined and defended them. People chanted “I kill, I kill whoever killed my brother” while throwing rocks, wood and other objects at the police.

Reuters: Iran will delay the release of the only...