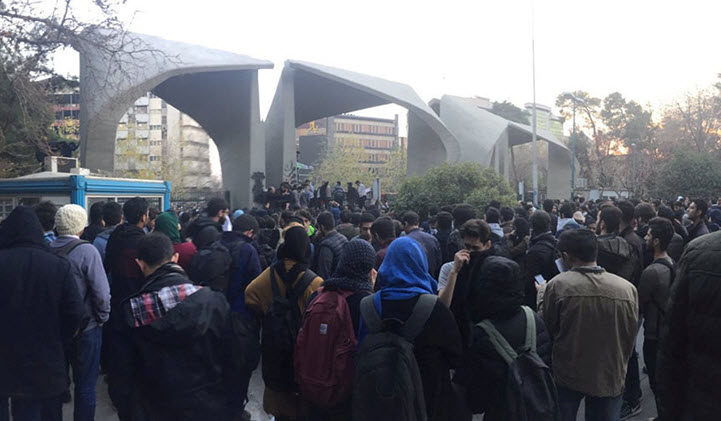 London, 16 Jan – The Iranian people have once again taken to the streets of Iran to protest against the malign Regime. It’s the biggest protest since 2009 and possibly even since the start of the Regime itself.

The people are protesting over corruption at every level of government, widespread economic problems, and many other things besides. Simply, they want an end to the Regime.

Many promised that the 2015 Iran nuclear deal would improve the Iranian economy by removing sanctions and releasing frozen funds. However, the lifting of sanctions and the release of assets couldn’t do much to help the economy when the Iranian Regime was content to funnel the money into their own pockets or use it to fund malign projects abroad.

You see, the Iranian Regime spent a great deal of this money on the Syrian Civil War to help dictator Bashar Assad stay in power against the wishes of the Syrian people and to fund terrorist groups like Hezbollah and the Houthis.

The Iranian people were disgusted that their money was being used to fund terrorism and dictatorships, but the Regime doesn’t care and will use the terrorists that they helped to suppress the protesters. They’ve already called in several Hezbollah-trained units to help.

Political analyst Faisal Al-Shammeri wrote: “There is no question that these individuals who currently occupy the seats of power in Tehran will not hesitate to use any means available to deny dignity and freedom, to the citizens of Iran and throughout the region as well, while using torture and murder as their response.”

Much like in Nazi Germany, the Iranian Regime is more than able to inflict horrors on the people through a secret police and hidden prisons. There is no reason to suspect that they will change their behaviour; they haven’t done so in the past 40 years.

So what can be done to help the people of Iran?

Well, while talking about the issue is a fine starting point, the world’s response to such crises is too often just words. We need action.

Shammeri advises treating the Iranian Regime like Bolshevik Russia, with Beirut, Damascus, and Baghdad as its outposts, and operating a containment policy.

He wrote: “A Cold War-like [policy] needs to be enforced against Tehran, and its ability to participate in all meaningful forms of global commerce should be denied, immediately and forthwith. The removal of the ulema in Iran, when it does finally occur, could potentially be viewed as the most significant geopolitical action since the fall of the Berlin Wall.”

The fall of the Iranian Regime would benefit the world but most of all the Iranian people.

Ken Blackwell: Western Dealings With Iran Must Recognize the Extent of Terrorist Threats

US sees attacks by Iranian-backed groups up in Iraq

Reuters: Attacks by Iranian-backed groups in Iraq have increased...