Iranian Truck Drivers Continue to Protest Against Their Worsening Situation 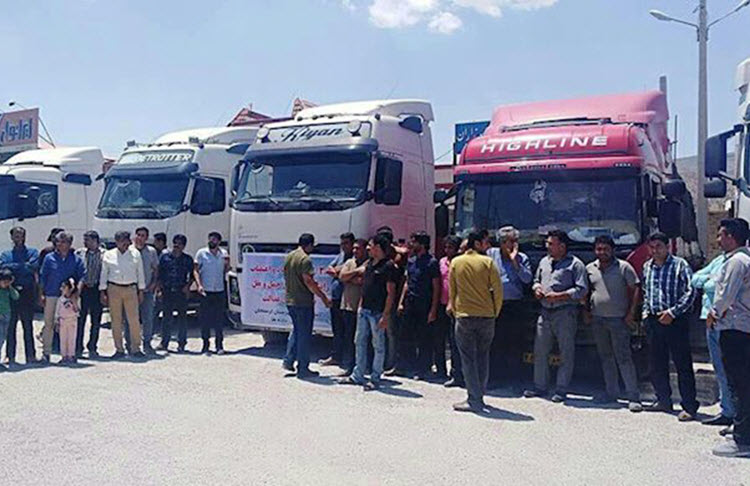 London, 24 May – Truck drivers in Iran have been holding a nationwide strike in protest against the Iranian regime’s corruption and mistreatment of the people. The strike started on Tuesday 22nd May and continued into Wednesday 23rd.

The Iranian regime has been plundering the wealth of the nation and it is now taking the people’s money directly.

There were truck drivers protesting across the country last week and many have vowed to remain on strike until their situation improves.

This is not the first time truck drivers have expressed their disdain at the situation they have been forced to endure. For years they have been calling on the government to address their situation. But they are still waiting for a resolution.

Reports indicate that drivers are left for weeks before getting another turn to deliver goods. Load taxes are also increasing and putting the drivers in a very difficult economic position.

In an attempt to create a rift between the protesters, the authorities in some areas decided to increase the wages for some drivers. However, this did not have the intended effect and the drivers continued to show unity. Instead of resolving the situation, the authorities have ensured that protests intensified.

The transportation network, like much of the rest of the country, is in a terrible state but the government continues to prioritise its plots abroad. The Iranian regime has been spending billions of dollars in Syria where it is propping up Bashar al Assad’s regime and it is continuing to support terrorist militias and proxy groups across the region.

The President-elect of the National Council of Resistance of Iran (NCRI) has called on everyone to support the truck drivers that are partaking in the strike.

One thing that is evident is the solidarity of the Iranian people. Forced to live with such hardship, the people are looking out for each other and working together to create a better future for themselves and the younger generations.

At the end of last year, millions of people in Iran took to the streets to protest against the dire economic situation that was seeing the people get weaker and weaker. The protests quickly turned into anti-government demonstrations and calls for regime change. The people were chanting “down with Rouhani” and “down with the Supreme Leader” and they called for the leadership of their country to leave Syria where is it fuelling conflict.

The Iranian Resistance has been supporting the people for years and it is encouraging the people to stay united. Many brave people in Iran have risked arrest, torture and even imprisonment to make their voice heard against the regime.

Human rights abuses have become a norm in Iran and this is not acceptable. The international community should not remain silent to such atrocities. It has a responsibility to ensure that human rights standards are met.

Some 71 Iranians were summoned to the Public and...

AFP: More than a year after a crackdown over...