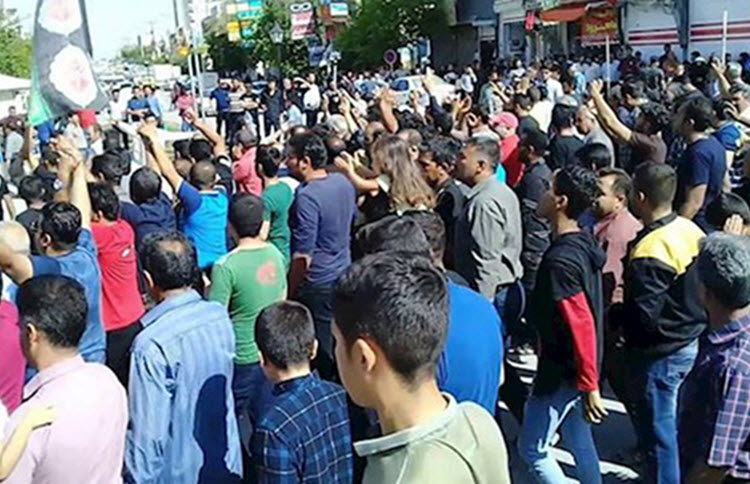 London, 24 May – On Tuesday, a video surfaced showing hundreds of people chanting that they would “avenge” the deaths of several protesters murdered in Kazerun, South Iran, on May 16, when the suppressive security forces used deadly force against them.

The original protest opposed the redrawing of political districts in Kazerun, but it soon became an overwhelming anti-government demonstration, with protesters chanting: “The government supports Gazans but betrays Kazerun,” and “Our enemy is here, not in the US”.

The widening protest in Kazerun represents a much bigger uprising by the Iranian people that began last December and has continued in spite of an aggressive crackdown by the government.

In late December, following the leak of a draft budget that slashed subsidies for the poor in favour of more money in the war chest, the Iranian people took to the streets in Mashhad.

The protests soon spread to neighbouring towns and took on wider issues, like human rights, a failing economy and a disastrous foreign policy. Soon it stopped being a protest about several different issues and became an overwhelming demand for major change, with protesters calling for the deaths of their rulers – an offence that carries the death penalty.

Despite this rising tide against the Iranian rulers, the mullahs have largely attempted to ignore the problem and arrest (or worse) the protesters. The attempts at cracking down on dissent show that the Regime is incredibly unstable and scared.

Support for the protests

These protests, largely ignored by the world, quickly got recognition from the most powerful man in the world, as Donald Trump warned the mullahs against suppressing the protests – a threat they ignored.

Now, the US has placed their support firmly behind the Iranian people with an Iran strategy that is leading towards regime change.

Secretary of State Mike Pompeo recently tweeted: “We support the Iranian people who are demonstrating against an oppressive government. Three deaths [in Kazerun] and internet interruption show the Mullahs’ true nature.”

Truck drivers in Iran are also on strike across 62 cities in 23 provinces, as news editor M. Hanif Jazayeri, who focuses on Iran, stated on May 22 that the protest concerns the “steep cost of government tolls on roads”. While the truckers’ strike has not yet been met with violence from the Mullahs, a fuel shortage may soon become a problem in the country and cause more uprisings from the Iranian people.

Bush: Talks with Iran to show US concerns on Iraq

Reuters: The United States wants to make clear in...

Will Iran’s Syria Policy Change After the Election of Donald Trump?