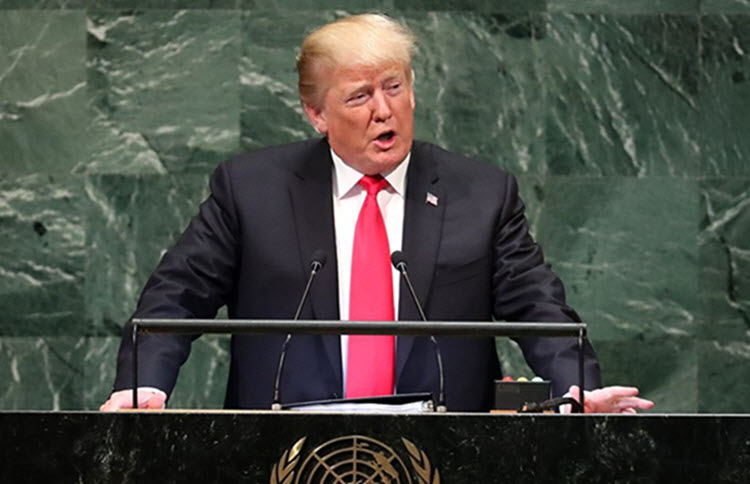 London, 26 Sep – On Tuesday 25th September, the U.S. President Donald Trump and several top officials in his administration spoke out about Iran and warned that Iran would have to deal with serious consequences if its belligerence continued.

President Trump spoke about Iran’s corrupt leadership, describing it as a dictatorship, and slammed Iranian officials for stealing wealth from the country. Trump also promised that he would continue to isolate Iran through the use of sanctions that are being put back into place after the U.S. exit from the 2015 Iran nuclear deal.

During his speech at the U.N. General Assembly, Trump spoke extensively about Iran; more than about any other country. He said: “Iran’s leaders sow chaos, death and destruction. They do not respect their neighbors or borders or the sovereign rights of nations. Instead Iran’s leaders plunder the nation’s resources to enrich themselves and to spread mayhem across the Middle East and far beyond.”

Trump’s National Security adviser, John Bolton, also warned Iran that there would be “hell to pay” if Iran decides to cross the United States or any of its partners or allies.

He said: “If you cross us, our allies, or our partners; if you harm our citizens; if you continue to lie, cheat and deceive, yes, there will indeed be hell to pay. The murderous regime and its supporters will face significant consequences if they do not change their behavior. Let my message today be clear: We are watching, and we will come after you.”

To coincide with the U.N. General Assembly, United Against a Nuclear Iran held an event. Secretary of State Mike Pompeo spoke at the event and talked about Iran’s numerous belligerent acts. He said: “It is truly an outlaw regime. There can be no question Iranian destructive activities are truly global in scope. It is therefore incumbent on every country to join our efforts to change the regime’s lawless behavior. The ongoing, multi-national, multi-continental nature of Iranian malign activity leaves no room for inaction or indecision.”

Predictably, Iran’s president, Hassan Rouhani, criticised the U.S. President and administration for exiting the nuclear deal and for imposing sanctions.

During a meeting in New York on Monday, top diplomats from the countries remaining party to the nuclear deal reaffirmed their support for it. Furthermore, they agreed to set up a financial facility in the EU so that Iran can make payments for imports and exports, including oil. They said that the facility will reassure and help those “pursuing legitimate business with Iran” and this is a move Iran has been pressuring the EU to take following the U.S. sanctions.

Pompeo criticised this action saying that it “counterproductive” in terms of “regional and global peace and security”. He said: “By sustaining revenues to the regime, you are solidifying Iran’s ranking as the number one state sponsor of terror, enabling Iran’s violent export of revolution and making the regime even richer while the Iranian people scrape by.”

By Pooya StoneThe number of street-vendors in Iran is...