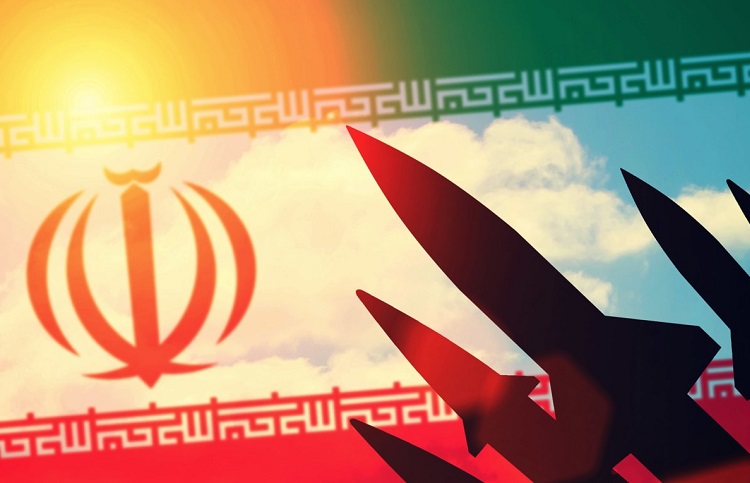 Two weeks ago Iran attacked the Aramco oil facilities in Saudi Arabia with drones and cruise missiles, yet attempted to pinpoint the blame on the Houthis in Yemen. The truth, however, was that the Houthis lack the technology for this type of attack.

US Secretary of State Mike Pompeo said there was “no evidence the attacks came from Yemen” and accused Iran of launching an unprecedented attack on the world’s energy supply.

Pompeo went on to tweet: “Tehran is behind nearly 100 attacks on Saudi Arabia while Rouhani and Zarif pretend to engage in diplomacy. We call on all nations to publicly and unequivocally condemn Iran’s attacks. The United States will work with our partners and allies to ensure that energy markets remain well supplied and Iran is held accountable for its aggression.” 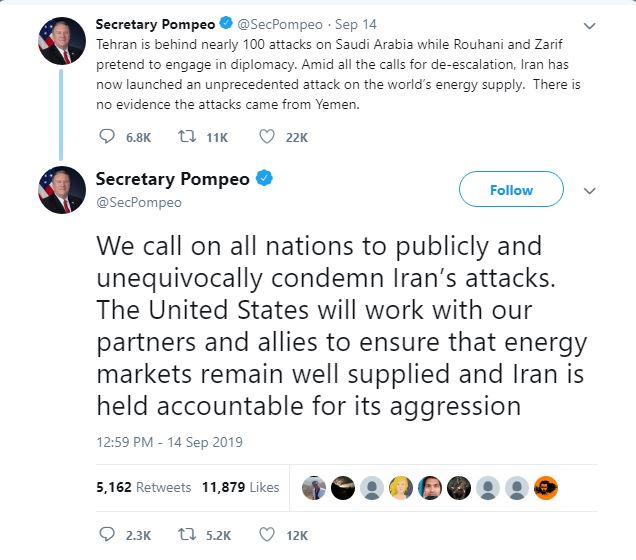 “It is now time for the U.S. to put on the table an attack on Iranian oil refineries if they continue their provocations or increase nuclear enrichment,” Graham of South Carolina said on Twitter. “Iran will not stop their misbehavior until the consequences become more real, like attacking their refineries.”

“Other countries have called out Iranian misadventures in the region, and we look for them to contribute assets in an international effort to reinforce Saudi Arabia’s defense,” Pentagon spokesman Jonathan Hoffman said.

Esper said the deployment was a first step toward addressing Iran’s increasingly violent acts in the region — including this month’s drone attack on Saudi oil facilities.

“It is clear that the weapons used were Iranian-produced and were not launched from Yemen,” he continues, noting that all signs indicate “Iran was responsible for the attack.”

On Tuesday 17 September, Iran’s supreme leader Ali Khamenei rejected all talks and said there will be “no negotiations on any level” with US officials on the sidelines of this year’s UN General Assembly. “Europeans did not fulfill any of their commitments and this is the strongest reason that they shouldn’t be trusted,” he added.

He continued that Europeans were as hostile toward Iran as the U.S., and that European mediation had provided little so far and their “long speeches” were without any practical effect. Khamenei urged the country’s officials to avoid relying on the heads of European states.

In yet another arena of tensions escalated by Tehran, Iraq is also suffering from Iran’s meddling, fearing their country would be the victim of escalating tensions between the US and Iran. Iran maintains control over Iraq through proxy militias to intensify the pressure on U.S. interests.
Iraq is attempting to clip the wings of the Iran-backed militias. One of the suspicions circled around the possibility of the Aramco attacks taking place from inside Iraqi territory. However, the Prime Minister of Iraq immediately issued a statement denying such allegations.

In the years after the U.S.-led invasion of Iraq in 2003, Iran also sponsored terrorist operation against the American troops, flooding the country with powerful roadside bombs that killed hundreds.

In recent months, elements within the Iraqi Popular Mobilization Forces (PMF) have repeatedly been blamed for rocket attacks targeting U.S. forces and their Iraqi allies, with crude projectiles striking various military bases. Early Tuesday, September 24, one rocket landed inside the sprawling U.S. Embassy complex inside Baghdad’s heavily fortified Green Zone, and another nearby in an empty lot.

All the facts from the statement of Iran’s supreme leader to prevent any negotiations with the West, the ARAMCO attack and the hidden attacks against the US troops in Iraq show that Iran lacks the capacity to sit behind the negotiations table.

The people of Iran are suffering from massive corruptions by the highest-ranking government officials. This, along with 40 years of oppression, has pushed the Iranian society to the edge of explosion, which terrifies the Iranian government.

Reuters: Terrorist blacklists drawn up by the United Nations...