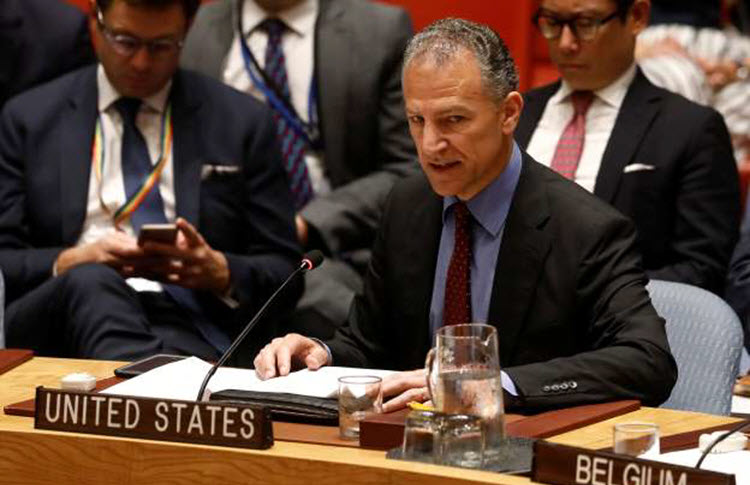 The United States has called on the UN Security Council to take a series of measures to ensure that its sanctions blacklist is enforced as thoroughly and as tightly as possible.

In the letter to the UN Security Council, the United States pointed out that the sanctions blacklist had not been updated for quite some time, meaning that the effect is not as enforced as it could, or should, be. For more than nine years, aliases and other such relevant information have not been included on the list that is distributed to all UN member states.

There are 61 entities and 23 individuals with links to Iran’s nuclear activities on the UN list. The UN member states are enforcing an asset freeze and global travel ban on all of them. The blacklist contains some significant Iranian figures such as Major General Qasem Soleimani, the commander of the Qods Force, a division of the notorious Islamic Revolutionary Guard Corps (IRGC).

In the letter, seen by AFP on Wednesday, acting US Ambassador Jonathan Cohen emphasised that in order for full implementation of the travel ban measures and the asset freeze, it is imperative that the designation list is regularly updated. He said that “continuing attention to the details of the designation list” is required.

The letter to the UN Security Council highlighted that the out-of-date information on the list was allowing banned persons to travel and gave the example of General Soleimani who has been partaking in extensive travel across the region despite the travel ban. The letter also drew attention to the Pars Aviation, an aviation services company that has since changed its name to Pouya Air.

At the beginning of the week, it was announced that the United States would be sanctioning eight senior Iranian commanders, the Iranian Foreign Minister Mohammad Javad Zarif and the country’s Supreme Leader Ayatollah Ali Khamenei.

President Trump states that these latest sanctions were a step up in the maximum pressure policy that his administration is putting Iran under and he said that the aim is to squeeze the already struggling Iranian economy. He also made it very clear that this latest action was in retaliation for Iran’s recent acts of aggression.

The Trump administration has taken a number of steps in recent months in an attempt to curb Iran’s belligerence, including threatening to sanction countries that continue to buy Iranian oil after the waiver expired and imposing more and more sanctions against key personnel.

Iran is under immense pressure and it is clear – given its recent aggression – that all measures, especially the UN blacklist, must be enforced to its maximum potential.

Washington Post: In a 300-year-old former caravansary, representatives from...

U.S. says no decision on Iranian talks in Baghdad