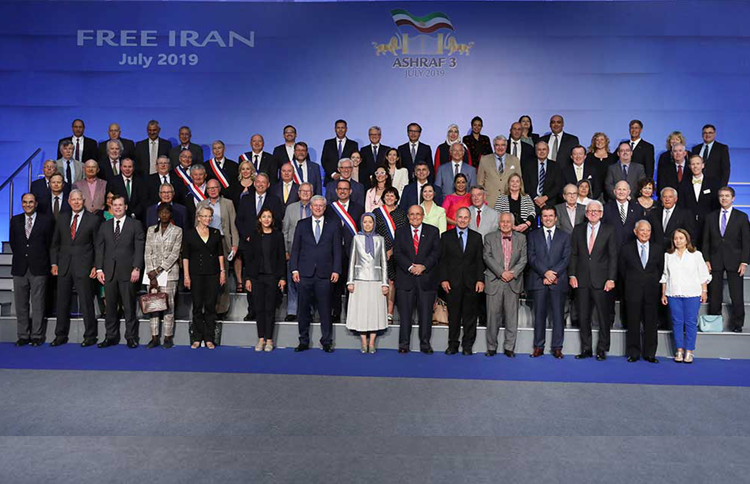 During the second day of a series of conferences, President-elect of the National Council of Resistance of Iran (NCRI) Maryam Rajavi addressed a wide audience at Ashraf 3 in Albania, where several thousand members of the main Iranian opposition People’s Mojahedin Organization of Iran (PMOI or MEK) are based.

Rajavi recounted the horrifying, bloody and brutal struggle that the people of Iran have lived through over the course of the past 120 years. She spoke about the terrible events that have happened during this time, but also expressed her gratitude for those that have continued to fight for freedom despite these harrowing circumstances. She said that despite her personal experience and involvement over the past 40 years, she is still shocked and moved at the exhibition that depicts such suffering and brutality that is incomprehensible. Rajavi paid tribute to all the “martyrs of the Resistance”, describing them as among the best and brightest of Iran.

Rajavi described the exhibition as depicting just a “snapshot” of the history when it comes to the struggle for freedom. She admitted that time constraints, much to her regret, would not allow her to give justice to each scene, but expressed her gratitude to all those that paved the way for the progress that has been made since.

The past 120 years, she said, has been a rollercoaster of emotions and events, highs and lows and losses and defeats. But it is a journey that is leading the people towards “certain victory”. She emphasised that progress is being made all the time and that despite a terrorist designation, massacres, firing squads, bombardments and missile attacks, the Resistance is continuing to advance. She recognised that the people of Iran have been thrown hurdles through this time, but compared the fight to a phoenix rising from “underneath our own ashes”. “We successfully prevailed over malicious hostilities, demonization campaigns and unbridled terrorism. Iran’s ruling mullahs want to claim that there is no viable alternative and that the People’s Mojahedin Organization lacks a social base and has no support. But thanks to our own and our people’s perseverance, history has nothing but scorn for the mullahs.”

Over the past four decades alone, there have been more than 120,000 executions of freedom fighters, including tens of thousands who were killed during one single summer in what has become known as the 1988 massacre – a crime against humanity that the regime has still not been held to account for. Women and children were treated in despicable ways and people have still continued to risk it all to stand against the regime. Despite all of this happening in the past four decades, the Resistance has manged to grow bigger and bigger.

Ashraf 3 is a significant location because it was established for those that endured hardship and pain that no one should ever have to face. The Ashrafis have endured long medical blockades and have been subject to harrowing psychological torture. They have got through a number of ground and aerial attacks using armoured vehicles and missile launchers and have seen their fellow Ashrafis die and get injured in miserable conditions. The regime has commissioned a number of bloodbaths and massacres of which they were the intended victims. “And, today, Ashraf 3 embodies the organized resistance of the people of Iran for freedom.”

Rajavi’s speech ended on a note of positivity with her declaring that the MEK Resistance Units located the whole way across Iran are advancing the cause, ensuring that society keeps up the momentum. She said that the Resistance is now at a “historic turning point” and that the regime is on its last legs. Liberation, she declared, is fast approaching and freedom is certainly going to prevail over dictatorship.

New York Times: As it faces the threat of...