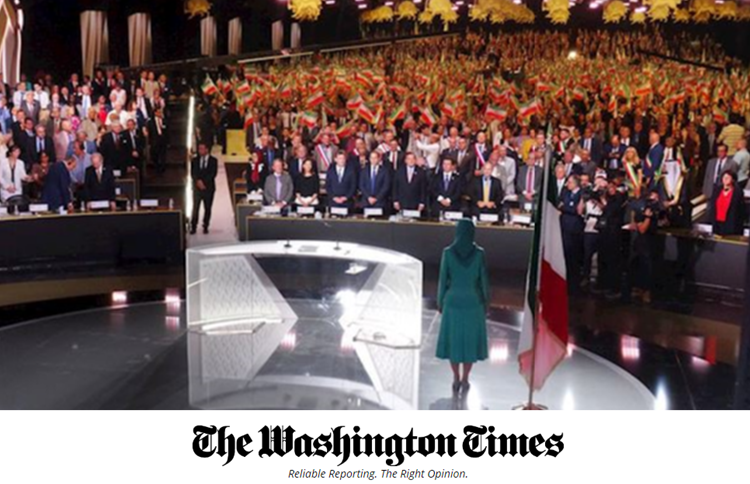 The Washington Times on Thursday published a special report about the Free Iran gathering that took place earlier this month in Ashraf 3 – the home to the People’s Mojahedin Organization of Iran (PMOI, Mujahedin-e Khalq or MEK) in Albania.

The special report named “Iran: The Power of the Alternative,” which was published in print on July 25, 2019, can be viewed online.

It outlines the event that took place in Ashraf 3 in which thousands of Iranians and hundreds of special guests, dignitaries, distinguished speakers, officials and former officials, members of parliament, human rights activists, and so on, joined the National Council of Resistance of Iran (NCRI) and the Mujahedin-e Khalq (MEK) in supporting the people of Iran in their wish to secure freedom, democracy and human rights following regime’s collapse.

The location of the event was highly significant. Ashraf 3 is where many of the former residents of Camp Liberty and Camp Ashraf in Iraq were finally relocated to after years of torture and attacks by the Iranian regime. The 2,500 members of the MEK that currently reside there, built the town in just over a year.

The special report highlighted that the MEK is strong and ready for regime change. Many of the speakers also reaffirmed that the Iranian Resistance is ready for the next stage in the journey to freedom, democracy and human rights, pointing out that the regime is very close to collapse because of the pressure that it is under.

Many of the speakers highlighted that domestic and international pressure is high, but also emphasised that the international community, particularly Europe, needs to be harder on the regime. Rudy Giuliani, Attorney to the U.S. President and Former Mayor of New York City, called on the Europeans to stop appeasing the regime and for the European governments “to stand up, to wake up, to reclaim their dignity and their honor”. He questioned: “So how can the leaders of those countries turn their back on mass murder? How can they do it and live with themselves? It’s time to end that shameful disregard.” Giuliani said that it was shameful for these governments to disregard the standards that their countries value so much.

The overall atmosphere of the event was one of positivity because of the progress the MEK has made over the past year alone, but the long road to get to this stage was not ignored. An exhibition portraying the decades of struggles was set up and Maryam Rajavi, President-elect of the NCRI led tributes to the many martyrs of the Resistance.

Congratulating the Ashrafis on their achievements over the last year, following years of suffering in Iraq, Mrs. Rajavi said Ashraf 3 “stands tall (…) but our final destination is Tehran, freed from the occupation of the mullahs.”

She said: “The mullahs have devastated our homeland, but we will take it back and we will rebuild this most beautiful country.”