US Intends to Protect Shipping in Gulf From Iran 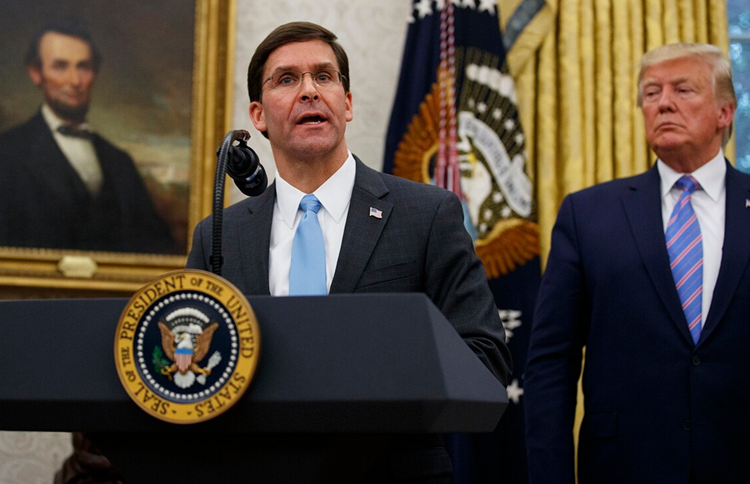 The new US defence secretary said Wednesday that the military intends to protect US commercial ships against Iranian threats in the Persian Gulf, but cannot provide naval escorts in every case.

Mark Esper, who previously served as the Army’s top civilian official, said: “We will escort our ships to the degree that the risk demands it… To the degree United States vessels need an escort, we will be there, we will be available to them.

I use ‘escort’ broadly. ‘Escort’ doesn’t mean” a warship would be sailing “right behind” a commercial vessel. What I mean by it is, as I said, to the degree that circumstances warrant, that we think that maybe a U.S. ship may be under some type of threat … (of) being stopped or being seized, then we would want to make sure we have the capacity to make sure that doesn’t happen.”

He elaborated by saying that in some cases airborne surveillance may be the only monitor or that a Navy warship would be “within proximity”.

He told reporters that the aim of the US presence in the Gulf is to deter Iran from threatening any American commercial ship.

Esper said that the Iran problem must be dealt with immediately, as threats to navigation in the region have become an international issue over the past few months as Iran has responded viciously to US economic sanctions targeting its oil exports.

Just last week, Iranian Revolutionary Guards swarmed a British-flagged oil tanker in the Strait of Hormuz, forcing it to change course and head towards an Iranian port. Iran is still holding al 23 crew members, although they are reported safe and well.

After that incident, US Central Command said it had begun additional aerial patrols. The US Navy also revealed in the past week that it had destroyed one Iranian drone that had been making threatening moves against the USS Boxer in the Strait; possibly even downing a second drone.

The Trump administration wants to build an international coalition to monitor and escort commercial vessels in vulnerable waterways in the Middle East to deter Iranian provocations; a plan called “Operation Sentinel”.

In a move that Esper sees as complementary to this, Britain announced plans on Monday to develop a Europe-led “maritime protection mission” to protect shipping in the Strait of Hormuz.

Esper was confirmed by the Senate on Tuesday, ending a seven-month absence of a defense secretary.

Reuters: Iran, dismayed at the plight of Syrian President...