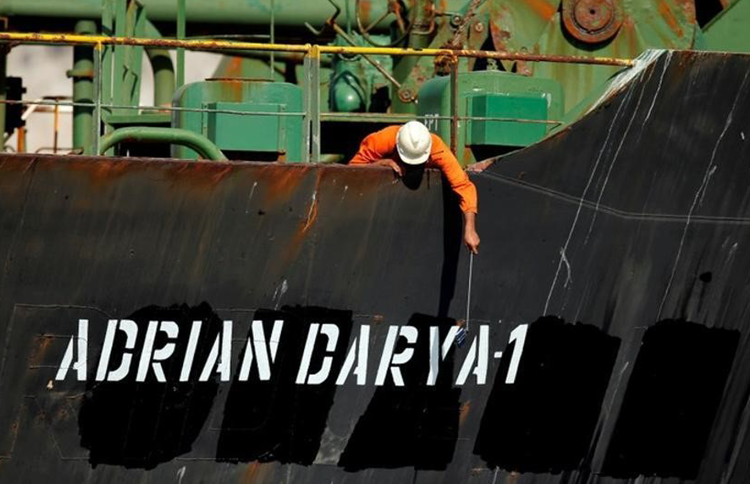 Previously known as Grace 1, the ship has been bouncing around the Mediterranean after being held for six weeks at Gibraltar on suspicion that its cargo was bound for Syria.

The U.S. Department of Treasury on Friday said the vessel is a “blocked property” under an anti-terrorist order, and “anyone providing support to the Adrian Darya 1 risks being sanctioned”.

The ship’s captain, Akhilesh Kumar, was also blacklisted under the same order, which generally prohibits dealings with blocked property by U.S. persons.

Lebanon had earlier dismissed Turkish claims that it would receive the ship, which has a cargo of 2.1 million barrels worth around $140 million.

While Iran has denied selling the oil to its ally Syrian president Bashar-al-Assad, experts said that the likely scenario was a ship-to-ship transfer, with a Syrian port as the final destination.

On Monday, August 26, Iran confirmed “selling oil” aboard the tanker and that the owner will decide the destination.

It did not identify the buyer or say whether the oil had been sold before or after the tanker’s detention in the Strait of Gibraltar, on Spain’s southern tip.

The U.S. Treasury said the ship was carrying 2.1 million barrels of crude oil and this transaction was ultimately to the benefit of the Iranian Islamic Revolutionary Guards Corps-Quds Force (IRGC-QF), “to fund the regime’s malign activities and propagate terrorism,” the U.S. Treasury department added.

“Vessels like the Adrian Darya 1 enable the IRGC-QF to ship and transfer large volumes of oil, which they attempt to mask and sell illicitly to fund the regime’s malign activities and propagate terrorism,” said Sigal Mandelker, head of terrorism and financial intelligence at the U.S. treasury.