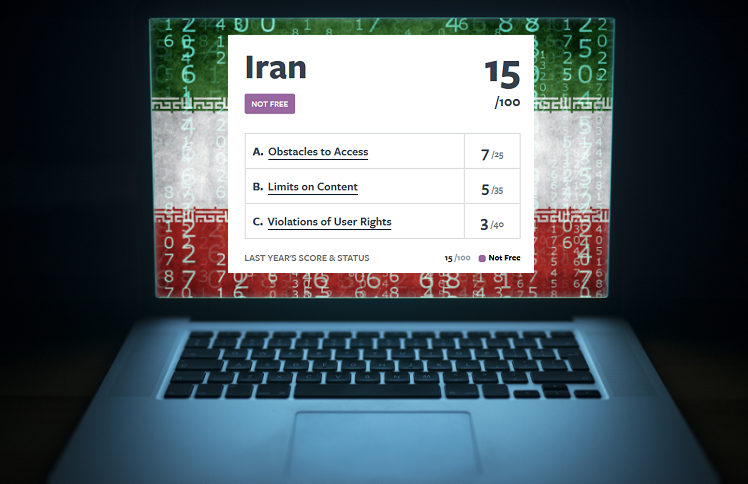 Internet censorship in Iran has been increasing. In the first few years of the 21st century, Iran experienced a great surge in Internet usage. As of 2018, Iran has an estimate Internet penetration rate of between 64% to 69% out of a population of about 82 million.

According to a new report by Freedom House. Authorities “handed down harsh prison sentences to online journalists and other users and continued to block access to independent news sites and a number of social media and communication platforms.”

#Iran‘s Internet Shutdown.
Regime’s authorities heavily restricted the internet in an attempt to quell the anti-regime protests but the Iranian people have been evading the censorship through the use of virtual private networks (VPNs).https://t.co/cx8v3PHWUz #IranProtests pic.twitter.com/c5AUe0M1Ii

Freedom House gave each country a numerical score from 100 (the freest) to 0 (the least free). Iran was designated “not free” because it received a score of 15 out of 100 for its level of internet and digital freedom. Iran received the same score during the 2017-2018 reporting period. The 2018-2019 score was based on three areas that Freedom House tracked:

The report noted that Iranian authorities have a 42,000-strong army of volunteers who monitor online speech. Key internet controls used by the regime included:

Internet penetration rates have improved in recent years, and connectivity in rural areas has increased. The Supreme Council of the Cultural Revolution announced in May 2019 that the National Information Network (SHOMA), an initiative meant to improve access across the country, was over three-quarters finished.

Significant restrictions on content have been in place since 2009. Major international platforms like Facebook and Twitter remained blocked during the coverage period, as was Telegram. Censorship decisions remained highly politicized, with both conservative and reformist news sites facing censorship for failure to adhere to strict guidelines on coverage of sensitive political, social, and international issues. Self-censorship is pervasive, and overt digital activism is fairly limited.

There have been no changes to legal restrictions on internet freedom, and several harsh prison sentences were handed down during the coverage period in retaliation for online activities, including a 26-year sentence. State-sponsored malware attacks have targeted a range of minority groups and activists located within and outside Iran.

US Issues Warning About Iran Breach in Microsoft Vulnerability

By Jubin Katiraie US Cyber Command has issued a...