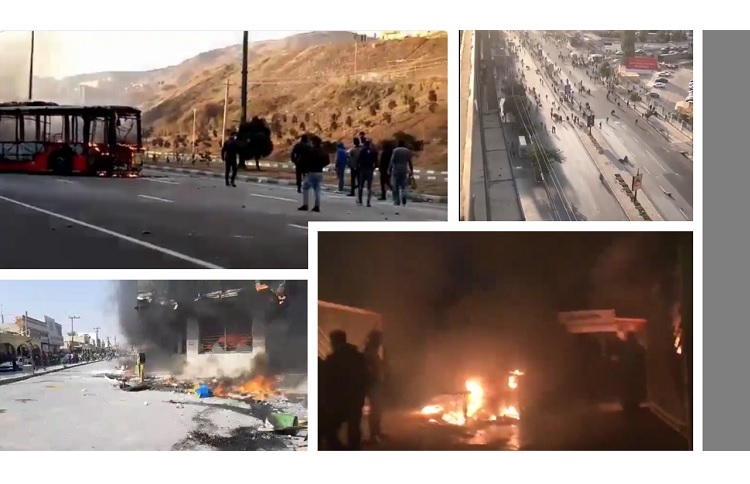 The Iranian government announced on Friday that the price of a liter of regular gasoline would increase.

Protesters angered by Iran raising government-set gasoline prices by 50% blocked traffic in major cities and occasionally clashed with police on Saturday, after a night of demonstrations punctuated security forces opening fire on protesters and killing at least one person.

Though largely peaceful, demonstrations devolved into violence in several instances, with online videos purporting to show police officers firing tear gas at protesters. In several places, demonstrators set fires in the streets. The price hike represents a political risk for President Hassan Rouhani ahead of February parliamentary elections. It also shows the widespread anger among Iran’s 80 million people who have seen their savings evaporate amid scarce jobs and the collapse of the national currency, the rial.

The demonstrations took place in dozens of cities in the hours following Rouhani’s decision at midnight Friday to cut gasoline subsidies to fund handouts for Iran’s poor. The new prices of gasoline jumped up to a minimum of 15,000 rials per liter of gas — 50% up from the day before.

In Iran’s oil-rich Khuzestan province, online videos purported the police firing tear gas on crowds. The province’s city of Khorramshahr also saw gunfire, as could be heard in a brief clip aired by state television. The region has long been a political tinderbox, with its ethnic Arab population that feels disenfranchised by its rulers.

#MEK Spokesperson warned the police force &armed forces not to fire on the ppl, lay down their weapons &hand them over to the people& reiterated that shooting &injuring ppl would bear severe punishment &consequences.#FreeIran #IranRegimeChange pic.twitter.com/g6BcnQgkpP

Saturday morning, the start of the Iranian workweek, saw protesters stop cars on major roadways across the capital, Tehran. Peaceful protesters blocked traffic on Tehran’s Imam Ali Highway, calling for police to join them as the season’s first snow fell, according to online videos. A dump truck later dropped bricks on the roadway to cheers.

A large crowd in the city of Kermanshah demonstrated and later drew tear gas fire from police, a video showed. Others reportedly clashed in Tabriz, another major Iranian city. In Tabriz, security forces again attacked demonstrators. Protesters in Ahvaz chanted for drivers to turn off their cars and block the roads.

#Iran regimes’ Security forces have killed 8 #Protesters &injured many others in clashes between courageous youth &savage suppressive forces of the police,#IRGC,paramilitary Basij,intelligence services,&plain-clothed criminals affiliated with the regime.#FreeIran #IranProtests pic.twitter.com/OMRvlp4ZLX

Protesters’ chants mirrored many from the late 2017 economic protests, which resulted in nearly 5,000 reported arrests and at least 25 people killed. Some of the protesters criticized Iran’s spending abroad on Palestine and other states of the region while the country’s people remain poor. Protests meanwhile continue in Iraq and Lebanon, two Mideast nations home to Iranian proxies and crucial to Tehran’s influence abroad.

Are we playing for keeps?

AFP : An Iranian man convicted of murdering his...