Iran: Technical Breakthrough in the Fight Against Corona or Pure Propaganda? 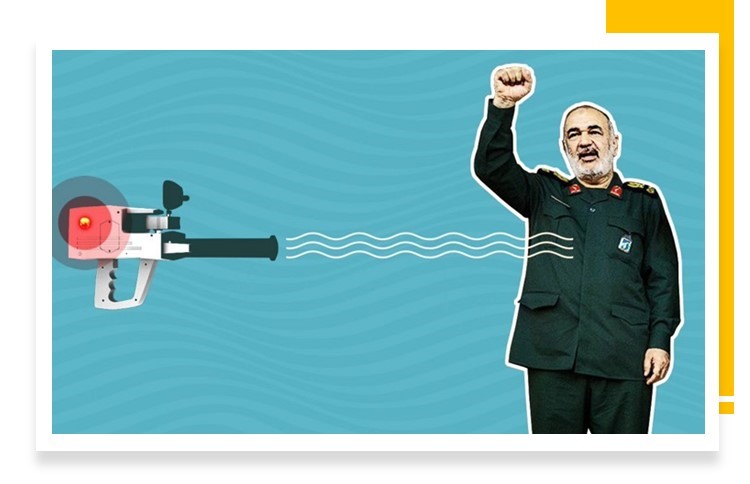 The Iranian Revolutionary Guards presented a device on Wednesday that is said to be able to diagnose people infected with the coronavirus at a distance of 100 meters.

“By generating a magnetic field, the device can detect any case of coronavirus infection within 100 meters of the area,” said the head of the Revolutionary Guard, Hussein Salami, the Iranian state news.

“The device delivers correct results with 80% certainty”, Salami continues. The “completely built-in Iran” device makes the analysis of blood unnecessary “because the intelligent detector can identify those who are infected with COVID-19 from a distance”.

Salami added on Thursday: ‘Dozens of countries’ had already asked Iran to get the device. Iran is ready for this. ‘The device’s production process, technical features, and capabilities’ will soon be shared with the media and experts, added Revolutionary Guard spokesman Ramazan Sharif.

Only one country does not want to help with the miracle device. The vital information about the corona detector would ‘not be shared with the Americans until all sanctions are lifted’.

But perhaps the West has no interest in the alleged innovation of the mullah regime. Because it looks like two Britons have been in prison for many years because of an almost identical technology fraud.

The device already exists – and it does not work

Experts found that the alleged mega-invention looks confusingly like a non-functioning bomb detector by some resourceful British businessmen and is said to work in much the same way.

The British James McCormick had produced a bogus ‘bomb detector’ in the mid-2000s, which could also use electromagnetic waves to detect truffles, human bodies, or banknotes up to 1000 meters away. Iraq, particularly plagued by bombings, spent a total of over 50 million euros on several thousand copies of the miracle detector.

“The mullahs seem to have learned nothing from all of this. After hiding the outbreak of the coronavirus for weeks to hold their fake elections in February, 4,869 people in the country have now officially died from the virus. Opposition members even speak of 29,000 dead, most of whom were kept secret and buried in mass graves.” (Bild, 17 April 2020)

“In order to maintain their image as a modern country that sets new standards in the fight against the coronavirus, the mullahs are now using obscure inventions that were exposed as fraud years ago.” (Bild, 17 April 2020)

On Thursday, 16 April, the Iranian Physical Society published a statement on its news website claiming that the Revolutionary Guards’ invention of the virus finder was so far from science and called it ‘fiction.’ 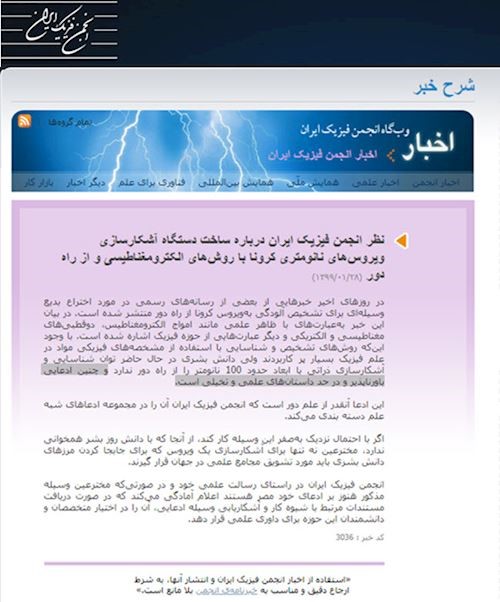 “In recent days, there have been reports in the official media of an ingenious invention of a device to detect contamination of the coronavirus remotely. The report cites scientific appearances such as electromagnetic waves, magnetic and electric dipoles, and other terms in the field of physics. Although diagnostic methods are widely used in physics using the physical properties of materials, human knowledge is currently unable to detect particles with dimensions of about 100 nanometers from far away, and such a claim is, and it’s about science fiction,” the association wrote in the statement.

The Physics Society added: “If this device works, but with close probability to zero since it is inconsistent with modern human knowledge, inventors should not only encouraged by the scientific societies around the world for the detection of a virus, but for the shift of the boundaries of human knowledge.”

Hussein Salami, the head of the Revolutionary Guards, claimed in a hilarious TV show that, “What you are seeing today is an emerging and unique scientific phenomenon and technology that, after the outbreak of the coronavirus virus in the country, was actually developed by a part of the Basijis with sincerity. ‘Creating a magnetic field means using a bipolar virus that is embedded in this device. Any point in the environment up to a radius of 100 meters that is infected, the antenna of this device is placed right in front of that point and manages to detect the infected point in about 5 seconds.” 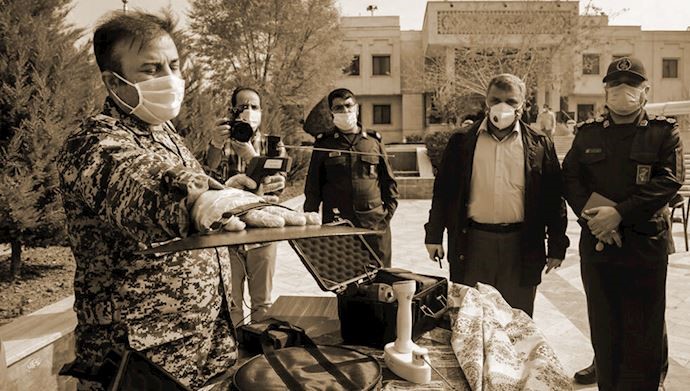 On the same day, Rouhani’s intelligence adviser, Hesam al-Din Ashna, stood up and warned the regime’s radio and television about the live broadcast of the virus detection antenna, saying: “In a situation where the public is confronted with strange news every day, do not advertise for innovative and unique and fictional virus detectors without the official approval of the Ministry of Health.”

And the social media reacted to this ridiculous claim:

Has anyone checked with Dr. Salami about his magic CORONAMETER today? pic.twitter.com/br2xe0WKV1

The US State Department’s Twitter account wrote that the Revolutionary Guards may also build a “genie finder”:

“General Salami says that this new and glorious device of the IRGC can detect anything infected with the virus up to a hundred-meter radius. It is strange that this device always beeps when approaching the IRGC personnel. Is it possible that you make a genie finder after this device?”

If the Iran Regime Be Toppled, There Is Hope for Peace in Iran, the Middle East and the World