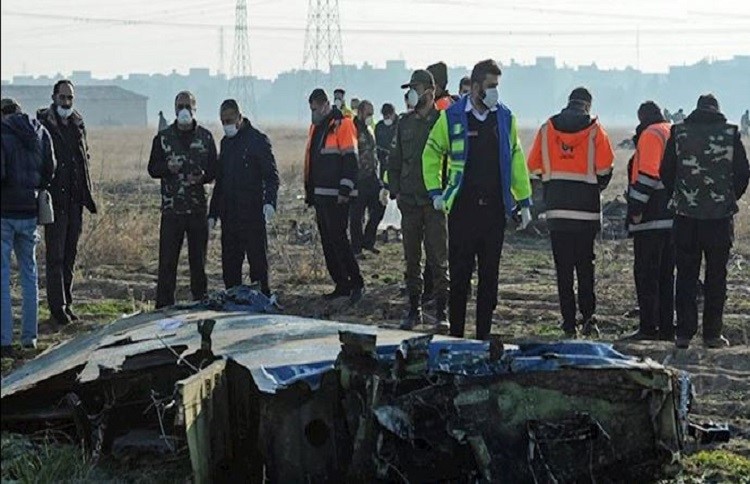 The International community has re-launched on the 100th day the case of the downing of the Ukrainian plane by Iran’s Revolutionary Guards (IRGC) which had killed 176 innocent people.

One hundred days after the downing of the Ukrainian plane by the Revolutionary Guards missiles, the Canadian Foreign and Transportation Ministers stressed that Canada, under the auspices of the families of the victims, is still pursuing audits, administering justice and paying compensation.

It has been 100 days since the IRGC killed 176 passengers on the flight PS752. The regime has refused to hand over the black box and has not prepared any report from this accident by taking responsibility for its actions or prevention of a recurrence.

“But the regime has found the resources to threaten the families of victims who have made their voices heard, and even to arrest and sexually harass relatives of victims who do not praise the regime for killing their loved ones,” the State Department said.

The US State Department continued: “The IRGC is taking severe revenge on innocent Iranians who have been the victims of the regime’s 41-year defeat.”

On the 100th day of the downing of the Ukrainian plane by the Revolutionary Guards, Minister of Foreign Affairs of Canada, François-Philippe Champagne, expressed his condolences to the families of the victims and said that the Canadian government is tirelessly pursuing justice.

Foreign Affairs Minister Francois-Philippe Champagne said he has not seen the proposed Iranian memo, and that there is no chance that Canada, Ukraine or any of the other countries that lost citizens would ever agree to waive their rights to hold Iran to account.

“That would not be in line with the discussion we have had so far and the resolve we have shown to stand up for justice for the families,” Champagne said Thursday in an interview with The Canadian Press.

“Some entities may want to spread some information that may not be accurate,” the minister added.

Hassan Nowruzi, an Iranian member of parliament. on 5 April by an interview with the state-run media Hamdeli on this event said: “The military forces did the right thing.”

About the reason for the IRGC’s action, he said: “Basically, the flight was suspicious.” And added, “The plane was out of the control of our watchtower and centers. The plane appears to be under US control. In fact, the plane deviated from its original route and changed its route from Tehran to Tehran instead of Ukraine. Therefore, the type of movement of this aircraft has been very suspicious.”

Such comments by the regime’s members are nothing new and reflect the behavior of it in international affairs while taking no responsibility for nothing and delaying any action.

On 6 April the Ukrainian foreign minister reacted on these comments and tweeted:

We expect an immediate explanation from #Iran on this deplorable statement. It shows full disrespect for human lives.Dozens of families from Iran,Ukraine,Canada,Sweden,UK&Afghanistan lost their loved ones in the attack against defensless civilian aircraft https://t.co/2jdDU5nz2v

Flight 752 of the Ukrainian International Airlines flew from Tehran’s Khomeini’s airport to Kiev, on January 8, 2020, with 176 people on board. Minutes after its flights, the Revolutionary Guards launched a missile near the new city of Parand in Tehran province, killed all the passengers, mostly Iranians.

According to media reports, the Iranian regime is seeking an agreement with the Ukrainian government to stop pursuing legal actions against the regime. The sources say the memorandum of understanding was drafted in such a way to allow the Iranian regime to shirk its responsibilities.

Ukraine has repeatedly stated that it is seeking a memorandum of understanding with the Iranian regime in which Iran accepts responsibility for the downing of the Ukrainian plane and ensures that the perpetrators are identified and that compensation will be paid to the relatives of the 176 victims.

Human rights violations and terrorism are two subjects that...