In less than a week, the Islamic Republic will hold its 13th Presidential election. Observers and even officials and state media forecast unprecedented apathy. Therefore, to drag citizens to the polls, handpicked candidates reveal damning details of one another. An important revelation has been that many officials have forged university degrees.

“Mr. [Judiciary Chief Ebrahim] Raisi, you have only studied until the sixth grade… It is impossible to manage economy with this level of education,” said Mohsen Mehralizadeh, a Presidential candidate, in the second round of televised debate on June 8.

“I respect your seminarist education… However, in your family trip, do you give your car’s steering wheel to someone who is religious, trustee, and pious, but he does not have driving license?” he added.

However, the catastrophe has been very painful for the government. Many officials  who hold and brag about their Ph.D., bachelor’s, and master bachelor’s lack minimum education. “Someone has a diploma but claims that he has a master’s degree. He cannot even write a simple letter. This is the outcome of such story,” said economist Mehdi Pazoki in a televised program.

During the power struggle , the state-run TV shed light on the systematic forgery. “The corruption was exposed when an individual affiliated with an institution complained to the Sciences Ministry. In our visits, we realized that the number of issued certificates do not match the number of students. For instance, an education institution has issued 1,000 certificates while there are only 25 official students,” the reporter said.

“Thanks to this clue, it was revealed that managers of the government and the private sector are the most dedicated clients of these [forged] certificates,” the report added.

In this context, several former officials like Mohsen Rezaei, the former commander-in-chief of the Islamic Revolutionary Guard Corps (IRGC), are among the above-mentioned private sector’s CEOs. Rezaei received his Ph.D. within one night without any prior notice.

“Mr. Zakani, you do not know anything about the economy. Have you passed even two classes of economy? The situation of your Ph.D. is also clear. It is clear how you gained your certificate. Don’t push me to say these truths,” said Abdolnasser Hemmati, the former governor of the Central Bank of Iran (CBI), addressing another Presidential candidate Alireza Zakani.

“Mr. Rezaei, you claim that you are an ‘economist.’ I very well know how you passed economic terms. I know how you gained your certification,” Hemmati added addressing Rezaei.

In response to Mehralizadeh and Hemmati, Raisi showed a license issued by Motahari University. However, Raisi’s certificate fueled ambiguities. The degree lacks minimum credit. For instance, the issuer has written Sayed instead of the name of Raisi’s father while everyone knows that Sayed is a title in the Persian culture. 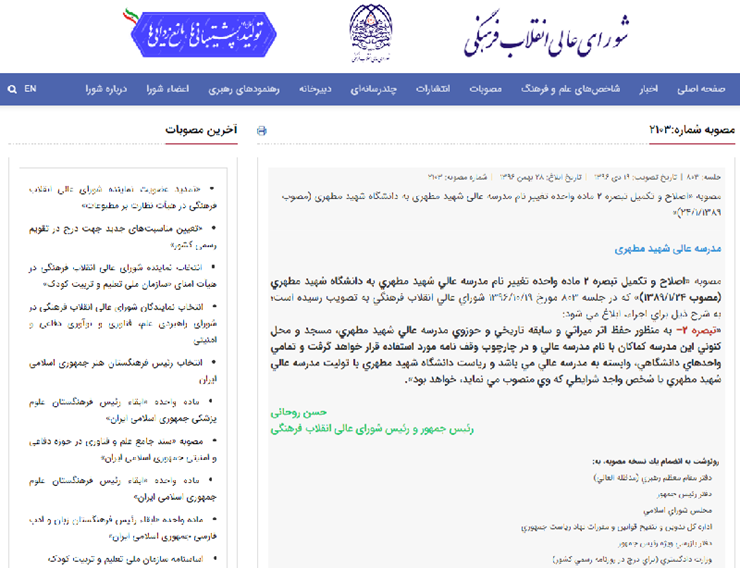 Also, the issuer has written that Raisi finished his education in April 2011. However, the certification was issued in February 2014. Furthermore, Motahari was a school in 2014 and only in January 2017 upgraded to a university.

Raisi’s forged certificate is the tip of the iceberg. And there are enormous samples of such forged certificates, including President Hassan Rouhani’s Ph.D. from Britain while he cannot speak English fluently to Ali Kordan, the Interior Minister of Mahmoud Ahmadinejad’s administration, who did not know that Oxford University is not located in London!

Houston Chronicle: In the coming weeks, the State Department...