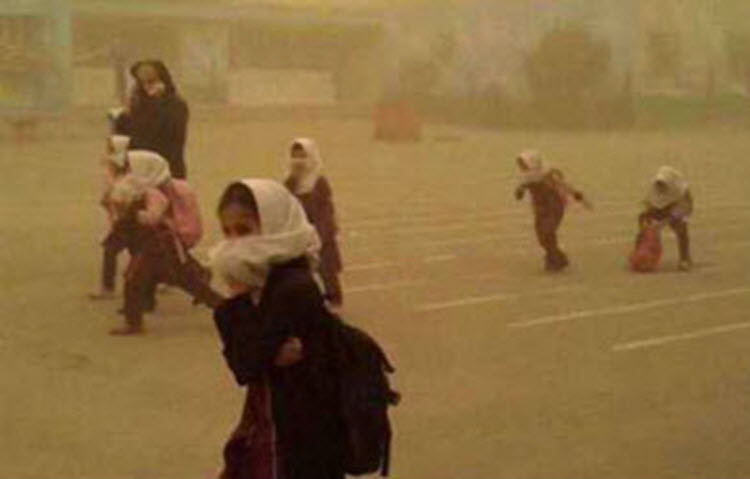 London, 1 Mar – The province of Khuzestan, western Iran has been literally covered in dust for days now, following major dust storms in the area.

• Power stations have broken down

• Water supplies have been disrupted

• Schools, banks and offices have closed

While the dust storms may have been an act of nature, there is no denying that the Regime has plundered its resources into foreign wars and even the civil wars of other sovereign states, rather than focusing on a disaster response programme or making sure that infrastructure around power plants was secure.

This has been the case for 40 years’ now and as always, it is the civilians paying the price.

It’s not as if the warnings weren’t there;

• Unregulated construction of dams caused rivers to dry up

• Industrial waste has been poured into the Karun, Iran’s largest navigable river, for decades

• There’s a lack of civil service in the region

• The World Health Organization named Ahvaz, the world’s most polluted city in 2015

In response to the disaster and the Regime’s lacklustre reaction, thousands took to the streets to protest at the lack of government support. They chanted slogans like “death to tyranny” and “Ahvaz is our city; clean air is our right”.

Ali Safavi, a member of the Foreign Affairs Committee of the National Council of Resistance of Iran, wrote on The Hill that in doing this, the protesters exposed the Regime’s biggest weakness: domestic opposition.

He wrote: “The Iranian people are grappling with unprecedented, devastating challenges caused by the ruling regime’s policies…It is clear those responsible for bringing on this enormous scale of ruin and tragedy will not be willing or able to offer genuine remedies. This is a regime, after all, that puts greater emphasis on Syria than its own provinces.”

He pleads with the US to label the Iranian Revolutionary Guard Corps (IRGC) as a terrorist entity and evict it from other middle eastern countries in order to solve regional crises.

He wrote: “Washington now has the opportunity to find a real partner in the Iranian people and their organised opposition. For the sake of American security, policymakers need to decouple Washington’s future from Tehran’s failing Islamic extremists and, instead, reach out to the people of Iran who want change, democracy, and a better life.”

He continued: “Washington should adopt a firm policy against the Iranian regime and its terrorist and repressive arm, the IRGC, while vociferously standing with those who seek genuine democratic change. This time, we shouldn’t stand idly by and let the dust settle in Iran.”

Reactions to UN decision to impose sanctions on Iran  Japan