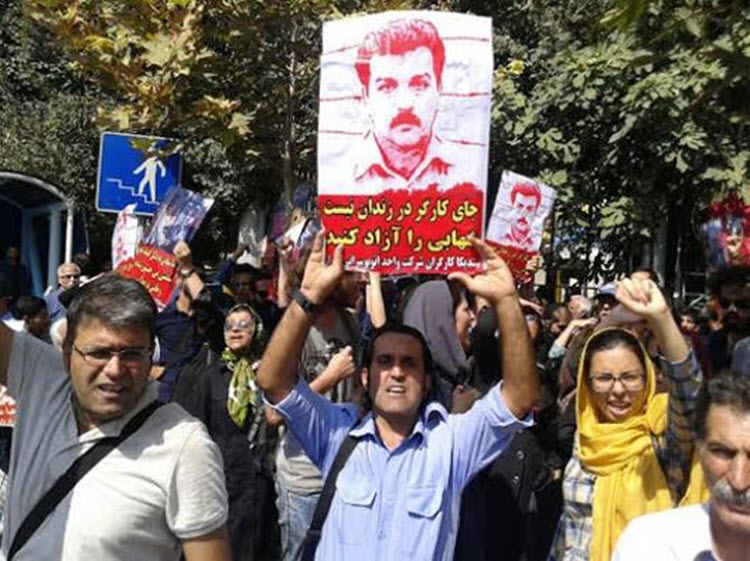 Following a call from the Workers’ Union of Tehran and Suburb Bus Company to attend a gathering in protest of the imprisonment of Reza Shahabi, members of this union, and a group of workers, students and teachers participated in the gathering.

At the gathering, which was held on Monday morning September 25 in front of the Ministry of Labor, participants protested Mr. Shahabi’s continued imprisonment and called for his immediate release.

Reza Shahabi, a member of the board of directors of the Workers’ Union of Tehran and Suburb Bus Company, has been on hunger strike for over 46 days in protest of his continued imprisonment after the end of his prison term.

Reza Shahabi, who was arrested in 2010 and sentenced to six years in prison, went on furlough for medical treatment and surgery after four years of imprisonment. However, upon termination of his prison term, the regime’s judiciary announced that five months of his leave was a non-stay and considered as “absence” and he has to go back to prison.

The judiciary also issued a statement to his wife this month saying that Mr. Shahabi was sentenced to another year imprisonment and should stay in prison for a total of 17 months.

In a gathering to support Reza Shahabi in front of the Ministry of Labor, his wife was accompanied by drivers of the Bus Company, students, teachers and a number of labor activists. The Bus Company Workers Union website has written that the deminstrators chanted slogans such as “Free Prisoner Workers” and “Freedom of Shahabi is our immediate demand,” and “Students, Teachers, Workers, Unity” as well as “From Arak to Tehran, Workers are in Prison.” The rallying crowds also chanted slogans against the minister of labor.

Tehran’s bus drivers drove with the lights on and a speed of 20km/h a week ago in protest of the continued imprisonment of Reza Shahabi. Earlier, five French labor unions, together with Amnesty International, called on the French President Emanuel Macron to intervene to protect Reza Shahabi’s life.

November 25 was the International Day for the Elimination...

AP: The State Department said Tuesday that a letter...