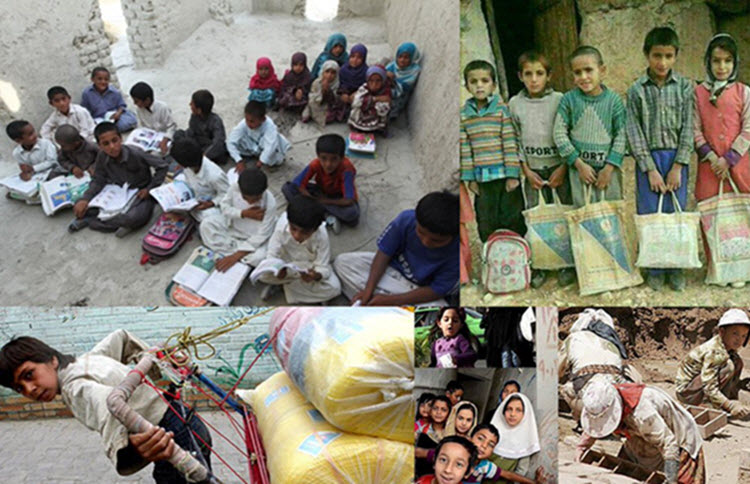 London, 19 Sep – The Iranian regime spent the billions it benefited from the lifting of sanctions after implementation of the Iran Nuclear Deal on exporting terrorism and extremist ambitions. Those expenditures have affected the livelihoods of the people of Iran, and stolen its children’s future.

For example, Iran’s Ruydad news website published a report on September 14th, that revealed the educational conditions for Iranian children. According to this state-run website,“Like many other national statistics, the exact number of children who have been deprived of education is not available. The figures offered by the ministry education differs from that of the Well-being Organization. The Mardom-Nahad body and other NGOs also offer different information.”

Ruydad cites statistics offered by the Well-being Organization, who says that in the first three months of the Persian year (March-June), the government has identified approximately 327,000 children in Tehran who aren’t going to school. This figure doesn’t take into account Iran’s provinces. But the Ruydad report goes further, “According to the most recent consensus, the country’s 7- to 19-year-old population is around 20 million people. If we compare this figure to the last consensus, which counted 12.6 million Iranian students, the count of children deprived of education spikes to 7.4 million!”

The Iranian regime’s education ministry has never acknowledged these statistics.

Member of the education and research commission in the Iranian regime’s parliament, Farideh Oladghobad says, “A while ago, the head of education in one of the counties of Golestan province approached us and said that they are faced with a large number of children who aren’t going to school, most of them being girls.” He added, “We don’t have accurate figures of the number of children who have been deprived of education across the country. For example, in Sistan and Baluchestan province, where the living conditions are harsh, our estimates are 100,000 uneducated children, but we don’t know if the other provinces are worse or not.”

While Iran’s constitution states that the government is responsible for providing quality education to all Iranian children, the MP blames the people themselves. He claims that the regime will be ratifying new regulations to penalize families who don’t send their children to school. However, a large portion of the population is living in substandard conditions and are struggling to make ends meet. Many believe this will give the regime another excuse to tax the people.

Statistics provided by international bodies and the Iranian opposition show that the Iranian regime spends a nearly $16-25 billion on the war in Syria, which is far more than enough to pay for the educational expenses of students in Iran and to renovate schools across the country.

State-run Mehr newspaper recently ran a report alleging that there are 32,000 primary schools for more than 4 million students across the country, and there are only 300,000 educational personnel working in these schools. School buildings are so decayed that they are in danger of collapse or cave-in, according to Mehr.

The Iranian people have already made it clear with continuing protests, that their miseries, including their children’s lack of access to proper education, will only end with the end of the regime in its entirely.