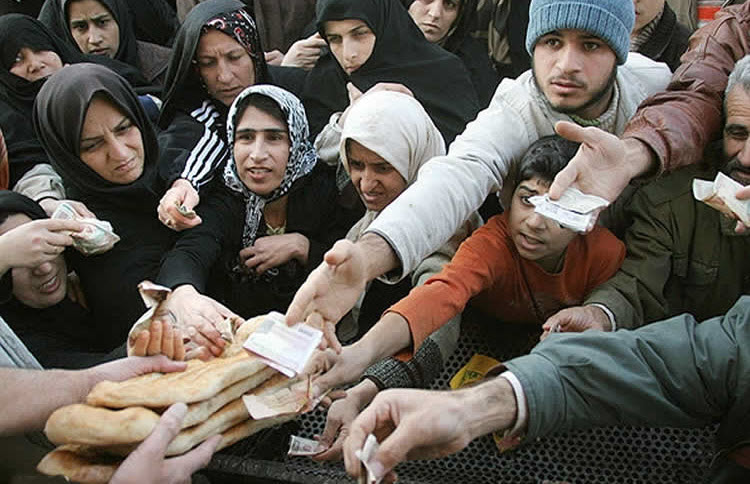 A high-ranking Iranian cleric has claimed that the Iranian people are overweight and should eat less, at a time when 80% of Iranians live in poverty and many are forced to search through the bins for scraps of food.

These comments from Naser Makarem Shirazi, a so-called Shia Marja, were no doubt deliberately designed to detract from the disastrous economic situation faced by ordinary Iranians.

Mullah Makarem Shirazi said, in comments carried by the Revolutionary Guards Corps (IRGC)-affiliated Tasnim news agency, that he’d heard a news report that claimed one-quarter of Iranians are overweight. He put down to Iranians eating too much food and advised that people should eat less, with the additional advice that they should eat less meat and more vegetables.

It should be noted that we could not find the source for his claims on overweight Iranians, but we do know that the majority of Iranians are not able to afford their basic needs and soaring red meat prices are causing a “meat crisis” in the country. This indicates that his comments are lies and that ordinary Iranians are not facing an obesity crisis, they are facing a food shortage crisis.

In fact, the Friday prayer leader in Hormozgan recently spoke with Iranian President Hassan Rouhani and explained that Iranians in the southern province could only “dream” of eating red meat.

The high meat prices have forced one-quarter of restaurants in Tehran to close down because customers couldn’t afford to pay for meat dishes. Other restaurants, according to reports on social media, have resorted to serving stews without meat in order to attract poorer customers.

Meanwhile, videos circulating on social media and news reports in state-run media show kilometre-long lines of people waiting to purchase imported frozen meat with government subsidies. However, that could not solve the problem. Many Iranians turned to social media to decry the subsidized meat of being “bad” and coming from “sick livestock”.

Not content with criticising Iranians for eating, Makarem Shirazi also told Iranians that they should spend less money on their Nowruz (Iranian New Year) celebrations next month in order to help impoverished families.

Of course, the Iranian government has done little to help the poorest in society, preferring to spend the public’s money on proxy wars throughout the Middle East, terrorist groups, and their malign nuclear and ballistic missile programmes.

Makarem Shirazi’s comments have nothing to do with the health of the Iranian people and are instead designed to normalise the Regime’s destructive policies and shift the blame from the perpetrators to the victims.