Ruins in the Name of Schools in Iran While Rebuilding Schools in Syria! 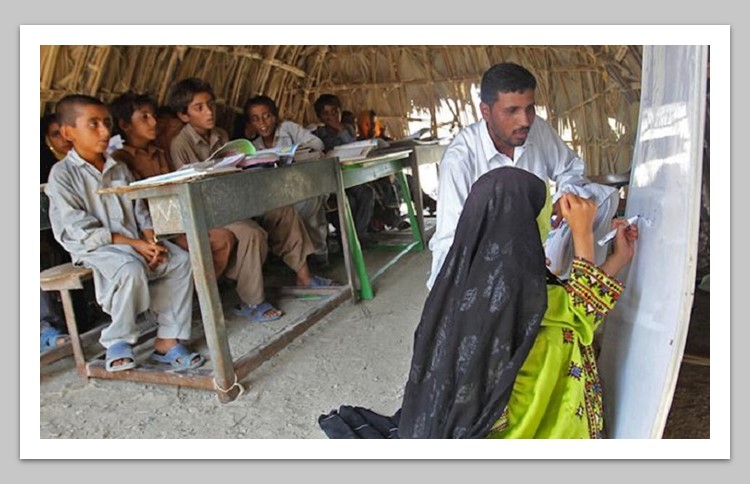 According to Iran’s official IRNA news agency, the Minister of Education of Hassan Rouhani’s government pledged in a visit to Bashar al-Assad’s Syria that they’re ready to participate in the rebuilding of educational facilities in the country.

He added that the regime is ready to cooperate with Syria in all areas of so-called reconstruction. (IRNA, 22 January)

Specifically, the mullahs’ spending on the killer Bashar al-Assad, while the head of the Iranian School Reconstruction, Development, and Equipping admit that 30 percent of the schools in Iran is worn out and needs to be rebuilt.

However, there are clay schools throughout the country that do not fully comply with the standard educational space.

The daily Arman on 19 January 2020 also cites the poor in flood-stricken areas of Baluchistan and wrote: “Days we have spoken about learning under the shadow, clay, and schools in trailers, for many years, a warm, standard school has been the dream of many students in the villages of Sistan and Baluchistan, but the floods dismay the students of Baluchistan and now they have to look for a shadow to study.

“For a week now, most Baluchistan students have been unable to go to school, many schools their roofs got damp, walls have been thrown into the classroom and water entered the classes and has been destroyed everything.”

Alam Yar Mohammadi, a member of the Iranian parliament from Baluchistan, also points to the widespread devastation caused by the flood and said about the damage to schools: “Almost all schools in flood-prone areas have been submerged.”

The situation in Hormozgan province is so dire that Shahrvand daily, in a report entitled “Ruins in the Name of School”, reports about schools in Hormozgan Province: “About 69,000 students in Hormozgan Province are studying in demolished and non-standard schools. 220 Hormozgan schools are 100 percent demolished and 450 schools need reinforcement. Hormozgan province has 61 trailer schools and 14 clay schools, schools that accommodated approx. 8.247 students. A vast majority of the people of Minab city live in villages. Schools that are not clay school and fall into the category of worn-out schools.”

Although the situation is very deplorable in flood-prone areas, the situation of educational facilities and schools across the country are worse than tensity.

The fact is that the existence of old and unsafe schools is one of the problems in the country’s educational environment. Other problems include the lack of standard heating equipment for the cold season, which has so far caused burn injuries for students in various parts of the country.

With such deplorable conditions, the Ministry of Education is facing budget shortages every year, while the budget of the military and IRGC forces, especially the budget of the IRGC Quds Force, is increasing year by year.

According to the Resalat newspaper, the Education’s Budget for 2020 is “an austerity budget for a ministry with corruptions”.

“Due to a chronic budget deficit and a lack of effective policymaking by this ministry, any fundamental and structural reforms that should add to the quality and efficiency of this crucial institution, and ultimately, should lead to a thriving society, is like enriching Uranium complex! the state-run media added.

The Ministry’s proposed budget for 2020 is 74 trillion tomans and there is a vast distance between the number of budgets proposed by this ministry and what the government had decided to realize, and this is coup de grace on the frail body of a ministry that its new coming minister, just not arrived, announced that one of its top priorities is to address the 16 trillion tomans budget deficit … education is a marginalized and humiliated institution that cannot play a dynamic and vibrant role in the life and development of the community.”(Resalat, 28 December 2018).

This is while after the elimination of the head of the Quds Force Qassem Suleimani, the regime’s MPs, in a high priority plan, approved by the Guardian Council, allocated a € 200 million budget for the Quds Force to spend on warmongering and terrorism in countries like Syria, Iraq, Yemen, and Lebanon.

What is noteworthy is the remark made by the Minister of Education of the regime, who talked about helping Syrian President Bashar al-Assad build schools. Previously, however, the mullahs’ regime in the rebuilding of Hezbollah-influenced areas in Lebanon, including the rebuilding of schools under the control of the terrorist group, was stealing from Iranian people’s pockets and investing it on the terror group Hezbollah.

As Hassan Nasrallah, the head of Hezbollah, 24 June 2016, confessed: “The world knows and we are announcing to the world that Hezbollah’s power, expenses, food, water, weapons, and missiles are provided by the Islamic Republic of Iran.”

BBC: An Iranian opposition leader has been jailed for...