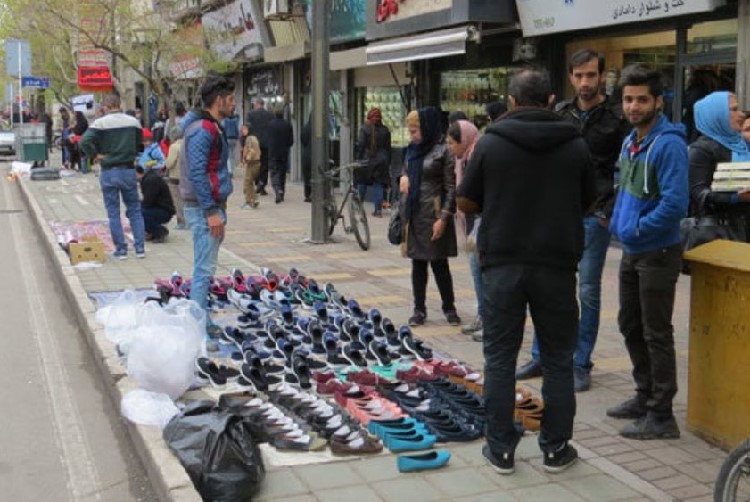 Free trade, particularly street-selling, is one of the phenomena of structural weakness in the Iranian economy and is essentially part of the institutionalized unemployment in the country. Most of the country’s street-sellers are former unemployed workers.

Due to their daily needs, these needy people are employed at different levels and diversity of jobs on the margins of Iran’s commercial body. They also face different obstacles, such as obstructing by municipality agents.

Given the coronavirus outbreak, this segment of society has been hit hard. They are not accounted for in any socioeconomic structure by the government, which has created a major problem for these people.

In tandem with the emergence of the coronavirus, the businesses of many free traders were shut down due to the preemptive measures like home quarantine and restrictions on urban traffic. Coffee shops, grocery stores, buffets, reception halls, restaurants, hotels, inns, nut distribution centers, as well as nut, pastry, ice cream, and juice stores have become vacant.

Also, many sports and leisure complexes, in addition to many other cultural occupations and workers of public services lost their careers. However, the government did not provide any support for these affected unemployed citizens who are approximately impoverished citizens.

Subsequently, according to the importance of these businesses in the country’s economy and producing affairs, Shafei provided eight suggestions to support these deprived citizens. In his suggestions, Shafei mentioned the tax exemptions and the six-month extension of all their benefits.

However, not only did the Rouhani administration ignore these suggestions, but this community remained deprived of even the small monthly subsidies for the poor.

Iranian Rulers’ New Trade Under the Excuse of the Supportive Packages

In early March, the Labor Ministry decided to allocate $125 worth of shopping cards to vendors. According to the plan, this amount of aid was to be deducted from their subsidies within the next two years. Additionally, the loan was only for families, none of whom have a steady job and income. Eventually, the amount was reduced to $62 alone.

Furthermore, the government was supposed to deduct this amount with 12 percent interest from the loan-receivers’ monthly subsidies in the span of two years. However, public complaints and grievances forced Rouhani to revoke the 12-percent interest.

On April 14, at a meeting of the administration’s economic headquarters, Rouhani announced a change in the way the $62 loan would be distributed to subsidy recipients. “In the next days, $62 will be granted to the people,” Rouhani said. To ease public complaints, he added, “This loan is not the same as before, and it will be given to the people in the form of an interest-free loan, and the government will cover the interest.”

“We should admit the fact that the poverty line is approaching to 5 million tomans [nearly $386] in cities and 10 million tomans [$772] in the capital Tehran,” said Rasoul Khezri, a member of social committee in the Parliament, on November 27, 2018.

In this respect, we will grasp the depth of the tragedy if we assume the same 10 million tomans as the poverty line. Notably, today, 10 million tomans are equal to $610, according to the official exchange rate. However, we should consider the inflation and high prices of goods within this period.

On April 13, Jahan-e Sanat daily exposed parts of the mentioned tragedy in a piece titled, “A government confused between bread and life.”

“32 millions of Iran’s 85-million population are slum-dwellers… Given Iran’s current socioeconomic condition, the mega-crisis of the coronavirus will lead to a massive human disaster inside Iran. This disaster may also extend to other countries in the Middle East, Asia, Europe, and across the globe,” Jahan-e Sanat wrote.

This 32-million population, which is slightly less than the 40-million population of Iraq and equal to the total population of Venezuela, is very significant and more than one-third of Iran’s population. These people generally reside in slums and make ends meet through small businesses like street-selling and different kinds of service careers.

These citizens, who constitute the low-income classes of the society, are bearing the brunt of the coronavirus outbreak and have been deprived of their already-low revenues. On the other hand, these poor people have always been exposed to harassment by municipality agents under various excuses.

Due to the government’s inability in employing this large population in production activities, Iran’s rulers have the main responsibility for these people and their difficulties. Moreover, officials’ terrible economic policies resulted in the shutdown of many factories and workplaces, which have exacerbated unemployment in society.

Such workers and employees struggle to feed their families by selling their belongings and borrowing money from those around them. Also, municipalities curb the business of this weak segment of the society and plunder their crafts and staff instead of aiding them by providing specific markets.

However, the oppressive policies of municipalities as executive apparatuses of the government only prompt public ire and hatred against the entire governing system. This issue is the flip side of the coin of systematic corruption and mismanagement at the expense of Iran’s ordinary people.

UN must be ready to act on Iran: Rice

Reuters: The United Nations Security Council must be ready...