Iran – Living on the Line to Be Burned 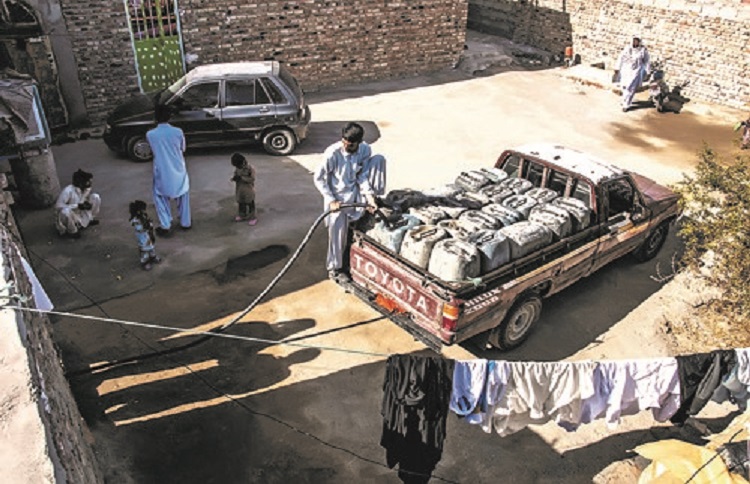 The tankers smell of gasoline. Most of them arrived from Tehran, Mashhad, and other cities. Driving on the dangerous streets to arrive Zahedan and Iranshahr.

The fuel transporters while waiting for them counting the moments. Filling their gallons and tanks the fuel transporters take the way to Pakistan by Chahbahar. They can choose the way of the sea too. The sea borders 250,251 and 254. Transporting gasoline is the first and the last choice of most men in Baluchestan.

The boys from the age of 10-12 after reading the last pages of their elementary school books sit on a Toyota’s chair for the apprenticeship of one of the gasoline transporters.

They clean car windows, accept the replacing of tires, they are carrying the fuel gallons while accepting the risk to be burned just for 20-30 thousand Tomans. The Khaki Toyota is the shared dream of all boys in Baluchestan. More than 120 thousand in the age group of 7 to 18, deprived of education is the official number of the central and south of Baluchestan, because of poverty.

Just a week ago the representative of Zahedan in the parliament Alim Yarmohammadi said about extreme poverty in the south area of Sistan and Baluchestan. According to him, about 75 percent of the people, especially in Baluchestan live under the poverty line of food security: “Most of the people who smuggle fuel are ordinary people of  that area; People who are looking to earn a living and their basic necessities and do so for a small fee.”

He informed about 158 truck trailers and other trucks who enter Sistan and Baluchestan, in which about 100 of them are smuggling fuel with fake bills of lading.

The children in this area, with fear, are choosing the dangerous off-roads to arrive at the borders until they become 20 and professionals, provided that they do not burn. Their destiny is knotted with fuel transporting.

Shahel one of them who is now two years on the off-roads and has survived, is now 12. He said: “I was 10 when my dad died. We had nothing to eat. Do you know how it feels to longing a few days just for a piece of stale bread? My dad was not a drug dealer, nor he was addicted. Like all other dads here, he was a fuel transporter. Someday he went and came never back, he burned.”

Now he is the partner of his uncle in this business, because not to become homeless. He said: “My uncle is paying the costs of eight and was not able to take care of us too. Now, I am accompanying him and for every travel, I am getting 30 Thousand Tomans. Do you know how it feels to drive a moving bomb?

“Each of these cars is a moving bomb for the driver and its companion. Every day we are forced to go on the road in such a bomb. This job is stressful. No one should see the fear in your eyes. The hope of the mothers are their sons, we should not discourage them. This is not a hard job, but it is very dangerous, this means playing with your life.”

Saravan is the destination of the kids of Zahedan’s Jam-e-Jam. Little men who are risking their lives just because of 100-120 thousand Tomans, to deliver the gallons full of gasoline to the middlemen in Saravan.

Elyas who started this job at 10, said: “I was 2 years old when my father died on this path. Hereafter the elementary school, the boys are graduate. 80 percent of the kids are the companions of the fuel transporters. Because their fathers are died or have been shot and are now disabled, sitting at home.

“I am now 20 and saw many who burned in front of my eyes. Friends, cousins. The first day I went to this job, I was really scared. Police fired and the bullets hit the cars. We were lucky. We barely made it and drove to the off-road to survive. For a long time in the fear of that moment, I woke up. We are fed up. Every night we have a nightmare because of death.

“Poverty is rampant here. People who are unaware of our current situation say that their fathers were killed because of dealing drugs. Who is dealing with the drug has enough money and do not need to do something like this, and hit the roads with the risk of fire and bullets, just to put food on the table. We are doing this just because not to starve.

“We hit the roads with just 5 percent of the chance to survive. Nobody is carrying about us. If they build a factory here no one will do this job.”

Satar said: “Around here not many people are studying.  While not able to end their educations, they are forced to transport fuel, which at the end of its road is just death. I am 18 years old and have only studied until the third grade.

“Hearing about death is something normal here, death by being shot, burning, and the crash of the car carrying fuel. This is not so that fathers are addicted and send their sons to the border, all of this is just because of hopelessness and poverty.”

The share of the children from this lucrative business is just about 20 thousand Tomans. Been killed, going to jail, and become disabled is the destiny of the fathers of these children. Soheil’s father who is now in jail said: “I started doing this when I was 13 years old. I left school and went to transporting fuel. I do not remember how many classes I have studied. 70 percent of the children here are transporting fuel. It took me a week to satisfy my mother.

“The starvation of my siblings forced my mother to accept that I took this job. The mother goes through extreme hardship to see their children alive again.”

64 percent of the people seeking help in this province live in deprived and rural areas with high coefficients of deprivation. More than 70 percent of the province’s population lives in absolute poverty. The underdevelopment rank of this province in the years of 1986, 1996, 2006 was rank 31 in the country.

In Iran, Half of the Country’s Population Does Not Have Access to Water Resources

Crackdown on militias may add to instability in Iraq

New York Times: A crackdown on the Mahdi Army...