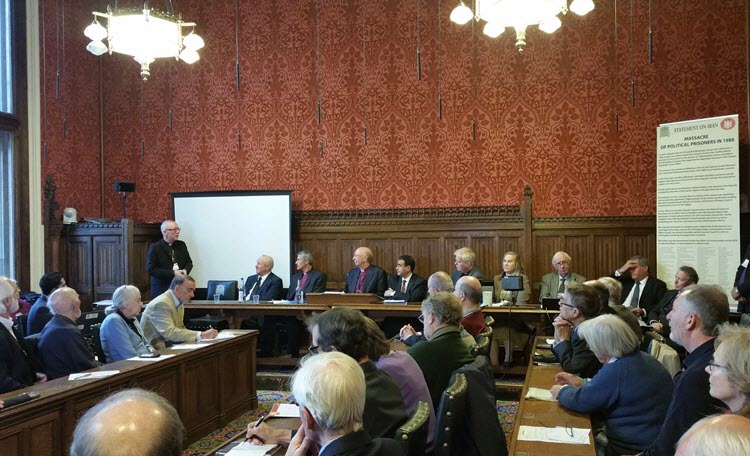 London, 18 Nov – Members of Parliament, Lords and religious leaders from the United Kingdom expressed their concern about Iran’s appalling human rights record and the continuing executions at a conference in the House of Commons on Thursday 17 November.

Conference participants called for an independent and international investigation of the 1988 massacre in Iran where around 30,000 political prisoners died. These deaths were based on a fatwa decreed by Ayatollah Khomeini – the Islamic Republic’s founder. These tens of thousands of people were buried secretly in mass graves. Most worryingly, those who were responsible for the events of 1988 are still in positions of power now.

President-elect of the NCRI, Mrs. Maryam Rajavi, spoke to the conference in a video message. She said: “Sixteen months have passed since the nuclear agreement was signed. So, there has been enough time to test various policies. The nuclear agreement was an opportunity for the mullahs to change their behavior or at least stop creating crisis and international terrorism. However, they increased their aggression and warmongering in the region, particularly in Syria. The Iranian regime remains the most hostile and significant contributor to instability in the region.”

“Some thought that human rights would improve in Iran. In the past year, however, nearly 1,000 people were executed. Rouhani’s interior minister has admitted that they arrest some 600 thousand people every year. These figures are only part of the reality.”

“A major achievement has been the Justice Seeking Movement launched to demand justice for the 30,000 political prisoners massacred in summer 1988 in Iran. The mullahs for long tried to conceal this horrific crime. The distribution of an audio recording of the remarks made by Mr. Montazeri, the ousted successor to Khomeini, revealed new dimensions of the massacre.”

“The Iranian Resistance is working through supporters in Iran to collect the documents and evidence in this regard. Our aim is to have the international community recognize this tragic massacre as a crime against humanity and prosecute the officials who were responsible. If the international community had not remained silent and passive in this regard, letting the criminals evade justice the wave of executions and repression in Iran could not have continued to date.”

“Another important development has been the spread of anti-government protests across the country. Thousands of people gathered on October 28th staging a protest against the mullahs in Persepolis, at the Tomb of Cyrus who was the founder of ancient Iran and the writer of a human rights charter, 25 centuries ago.”

The pan-Arab daily Asharq Al-Awsat covered the event on Friday in both its Arabic and English versions.

“At the conference that was chaired by Rt Revd John Pritchard, former Bishop of Oxford, on Thursday, cross party MPs, Lords and British religious leaders expressed their serious concerns over the alarming rate of executions in Iran, including public hangings and execution of juvenile offenders and women”.

“The conference is of extreme political importance, as it sheds light on the Maryam Rajavi’s Ten Point Plan to free Iran,” Member of the Parliament in exile of the Iranian resistance (NCRI) Hossein Abedini told Asharq Al-Awsat.

Abedini expressed his growing optimism that the MEK will one day put off all Iran regime violations against human rights and holding the cleric-led power accountable.

“It will one day overcome the regime’s savage approach and terror-inclined behavior, which will cut down tensions and chances of regional war outbreak,” Abedini added.

(Reuters) - The U.S. senators behind a tough sanctions...