AFP: Iran and world powers failed to clinch a long-sought deal Sunday on Tehran’s nuclear programme despite marathon talks in Geneva but kept hopes alive by agreeing to meet here again on November 20.
By Jo Biddle and Jonathan Fowler – 1 hour ago 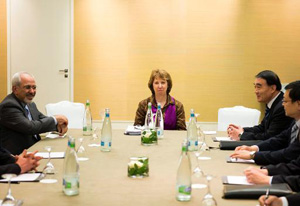 In Tehran, Iranian President Hassan Rouhani pleaded for parliament’s backing in the negotiations while insisting that Iran would not abandon its nuclear rights, including uranium enrichment.

Diplomats said significant progress had been made in three days of intense negotiations aimed at reaching agreement in the decade-long standoff.

Hopes had soared for an impending deal after top world diplomats rushed to Geneva to join the talks, but faded after cracks began to show among world powers when France raised concerns.

Emerging in the early hours of Sunday from a last-ditch negotiating session, EU diplomatic chief Catherine Ashton and Iranian Foreign Minister Mohammad Javad Zarif said the two sides had not been able to come together on a deal.

“A lot of concrete progress has been achieved but some issues remain,” Ashton said. “Our objective is to reach a conclusion and that’s what we’ll come back to try to do.”

Zarif said he was not discouraged by the failure of the talks, saying the meetings had taken place in a positive atmosphere and that he hoped to reach an agreement at the next talks.

“I’m not disappointed at all,” Zarif said. ?We are all on the same wavelength and that’s important… Actually I think we had a very good, productive three days and it’s something we can build on to move forward,? he added.

French Foreign Minister Laurent Fabius was the first to reveal that the deal had failed, pre-empting the official announcement after the talks broke up.

Fabius had earlier raised concerns that the proposal did not go far enough to curb Iran’s nuclear ambitions.

“The meetings in Geneva have made it possible to move forward, but we have not yet managed to conclude, because there are still some questions remaining to be dealt with,” Fabius said.

He insisted that France wanted an agreement, despite claims from some officials that Paris had stymied efforts to reach a deal.

US Secretary of State John Kerry, who had cut short a Middle East tour to join the talks, said “significant progress” had been made.

“There’s no question in my mind that we are closer now as we leave Geneva,” he said, adding that Washington remained intent on ensuring that Iran does not obtain a nuclear weapon.

“We came to Geneva determined to make certain that Iran does not acquire a nuclear weapon. That remains our goal,” Kerry said.

The talks involved the P5+1 group, which includes the five permanent members of the UN Security Council — Britain, China, France, Russia and the United States — plus Germany.

The draft deal said to be on the table could have seen Iran freeze parts of its nuclear programme in exchange for the easing of some of the sanctions that have battered its economy.

The world powers in the talks suspect Iran’s programme is aimed at developing nuclear weapons, despite Tehran’s repeated denials.

Rouhani — whose election is widely credited with kickstarting the nuclear talks — earlier urged world powers to seize what he called “an exceptional opportunity” for a deal.

Reports said the proposed deal could have seen Iran stop enriching uranium to 20 percent, which is just a few technical steps from weapons-grade, reduce existing stockpiles and agree not to activate its plutonium reactor at Arak.

Global powers would have in exchange taken limited and “reversible” measures to ease sanctions, such as unfreezing some Iranian funds in foreign accounts.

Negotiators would then have had time to work out a more comprehensive deal that Iran has said it hopes could be in place within a year.

Rouhani told the conservative-dominated parliament in remarks quoted Sunday by the ISNA news agency that Iran would not cross any “red lines” and would retain its international right to “enrichment on Iranian soil”.

?If we want to succeed in these negotiations, we need the support of the supreme leader (Ayatollah Ali Khamenei) and of lawmakers,? he told them.

The possible agreement had already come under fire from Tehran’s arch-foe Israel, widely thought to be the Middle East’s sole if undeclared nuclear armed power, which has opposed any move to ease sanctions.

Israeli Economy Minister Naftali Bennett said Sunday his government would lobby the US Congress to prevent an agreement being reached — one Prime Minister Benjamin Netanyahu called a “very bad deal”.

After years of fruitless efforts, talks over Iran’s atomic activities were given new momentum by the election of Rouhani, seen as a relative moderate, in June.

Iran is anxious for relief from crippling US and European Union economic sanctions that have cut oil revenues by more than half, caused the value of its currency to plunge and pushed inflation above 40 percent.