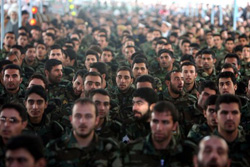 “Whatever the severity of sanctions, they are not worrying us,” IRNA quoted deputy Guards’ commander Brigadier General Hossein Salami as saying.

“We have grown and shaped our defence capabilities after taking into consideration the worst case scenarios,” he told IRNA.

“It is the world outside which would lose from these sanctions. We are not worried about sanctions.”

The Revolutionary Guards, set up after the 1979 Islamic revolution to defend it from internal and external threats, have extended into Iran’s economic and industrial sectors under hardline President Mahmoud Ahmadinejad.

New UN sanctions imposed Wednesday target the force, accusing it of involvement in a nuclear programme which the West suspects is aimed at building a bomb, but which Iran insists is entirely peaceful.

The sanctions were imposed after Iran repeatedly refused to stop uranium enrichment, the most controversial aspect of its atomic programme.

The punitive measures obligate states to exercise vigilance in dealing with entities linked to the Guards. The sanctions list 15 industrial outfits attached to the force, including its main industrial wing, Khatam al-Anbiya.

Salami said the Iranian economy was not driven by big powers and that “the threats of the US and the Zionist regime, sanctions (and) intimidations, have become old and worn out issues.”