New York Times: The European Union intensified the economic isolation of Iran over its nuclear program by ordering its toughest economic sanctions yet against the Iranian government on Monday. European energy companies and insurers affected by the new controls promised to comply. 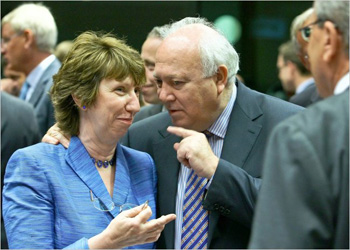 BRUSSELS — The European Union intensified the economic isolation of Iran over its nuclear program by ordering its toughest economic sanctions yet against the Iranian government on Monday. European energy companies and insurers affected by the new controls promised to comply.

Although European companies will still be allowed to import oil and gas from Iran, the sanctions go beyond those in the fourth round imposed by the United Nations last month. The European move follows the imposition of additional sanctions by the United States.

Meant as punishment for Iran’s refusal to halt its enrichment of uranium, the measures appeared to prompt a flurry of diplomatic activity, with Iran saying it was ready to return to talks on a nuclear fuel swap. But it was unclear whether the offer was anything more than another in a series of maneuvers by Tehran to buy more time. Western nations suspect Iran is trying to build a nuclear weapon; the country insists that its nuclear program is peaceful and that sanctions will not persuade it to change course.

While American investment in Iran has dwindled over recent years, the European Union, with 27 member nations, is Iran’s largest trading partner, taking in a third of its exports and selling it billions of dollars in goods and services.

That means that the measures could have a significant impact, though it was too early to determine the financial effect on European companies and the Iranian economy. The European Union’s foreign policy chief, Catherine Ashton, said figures on the amount of trade that would be involved in the sanctions were still being assessed.

The 27 European foreign ministers, in a statement, said they had agreed on “a comprehensive and robust package of measures in the areas of trade, financial services, energy, transport as well as additional designations for visa ban and asset freeze,” saying that it would focus on Iranian banks, the Islamic Revolutionary Guards Corps and the Islamic Republic of Iran Shipping Lines.

Details of the companies and individuals covered by European measures will not be released until Tuesday at the earliest. But a draft text, discussed by foreign ministers at their meeting here in Brussels, identified dozens of individuals and companies, particularly those with ties to the Revolutionary Guards and the shipping company, officials said.

“We’ve sent quite a powerful message to Iran,” Ms. Ashton said. “That message is that their nuclear program is a cause of serious and growing concern to us.”

The European Union has been keeping the door open to talks with Iran, hoping to use economic isolation as a lever to force Tehran to talk.

On Monday, Iran said it was prepared to return to negotiations on an international deal to swap some of its lower-enriched uranium for more enriched uranium “without conditions,” according to the official IRNA news agency. Western nations had proposed such a deal to remove some of Iran’s uranium stockpile while meeting its stated need for power-plant fuel and medical isotopes. Iran has agreed in the past, only to alter the conditions in ways unacceptable to the West.

Meanwhile, analysts said that many European companies had already reduced their dealings with Iran, but that the measures could take a toll. “Over the long term Iran’s output of oil and gas will continue to decline without European technology,” said Mark Fitzpatrick, director of the nonproliferation and disarmament program at the International Institute for Strategic Studies in London.

He added that Iran would find it difficult to get insurance since European and North American companies dominate the sector.

David Williams, a spokesman for Shell, said that the company would apply the sanctions and had already been reducing its investment in Iran.

“We have not been supplying gasoline to Iran since October last year and we are not renewing a small number of contracts to refuel Iranair,” he said.

Mr. Williams would not comment on whether the company would be able to proceed with its involvement in Persian LNG Company, a proposed natural gas project in Iran, adding that no decision had been taken on whether to invest before Monday’s sanctions were agreed.

Total refused to comment in the impact of the sanctions. It said recently that it had financed a number of Iranian fields — Sirri, South Pars 2 & 3, Balal and Dorood — under contracts for which it is still owed repayments. It also has a technical services agreement for the Dorood field.

A subsidiary holds a 50 percent stake in Beh Total, which produces and markets small quantities of lubricants. In 2009, revenue generated from Beh Total’s activities was 27.4 million euros and cash flow was 5.6 million euros. In 2009 it bought around 58 million barrels of hydrocarbons from state-controlled entities for approximately 2.6 billion euros, and paid to a state-owned entity approximately 24 million euros for shipping contracts.

However Richard Rogers, spokesman for EGL, a Swiss-based energy company, said that the sanctions imposed by the United States and the European Union “have no impact” on the existing natural gas procurement between EGL and NIGEC (National Iranian Gas Export Company) under which the Iranian company delivers natural gas to the Iranian-Turkish border.

Meanwhile Bart Nash, external communications manager at Lloyd’s of London, said that it would always comply with applicable sanctions, but that “the Lloyd’s market has been cutting back its exposures to Iran over the last two years, so any residual business is very small indeed.”

The draft text on which the European Union sanctions are based calls for a bar on the “sale, supply or transfer of key equipment and technology” for refinement, liquefied natural gas, exploration or production. European companies would not be able to provide technical or financial help “to enterprises in Iran that are engaged in the key sectors of Iranian oil and gas industry.”

The draft requires European Union governments to monitor Iranian banks in their jurisdiction closely. Financial transfers above about $50,000 would require prior authorization.

Iranian banks are expected to be prohibited from opening new branches or subsidiaries in the European Union. There would be a ban on providing insurance and reinsurance “to the government of Iran, or to entities incorporated in Iran or subject to Iran’s jurisdiction.”

The draft also specifies that countries in the bloc would be expected to stop “all cargo flights operated by Iranian carriers or originating from Iran with the exception of mixed passenger and cargo flights.”

Reuters: Iran's policies of standing up to the United...