AFP: Iran’s preparation to launch its first nuclear power reactor, built with Russian assistance, shows that Tehran does not need to pursue its controversial plans for uranium enrichment, the White House said Friday. 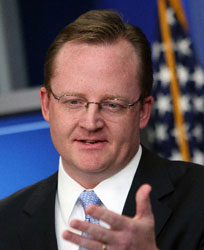 “Russia is providing the fuel, and taking the fuel back out,” spokesman Robert Gibbs said, referring to the highly sensitive Bushehr plant in southern Iran which Russian atomic agency Rosatom said would be formally launched on August 21.

He said it shows that “Iran doesn’t need its own enrichment capabilities,” which Tehran has stressed are crucial for domestic nuclear energy production.

The Islamic republic has insisted its nuclear ambitions are purely for civilian energy purposes, but the United States and other Western nations fears the program masks a weapons drive.

Gibbs said Friday that Tehran’s use of Russian fuel “underscores that Iran does not need its own enrichment capability if its intentions, as it states, are for a peaceful nuclear program.”

This “proves to the world that, if the Iranians are sincere in a peaceful program, their needs can be met without undertaking its own enrichment program, which call into question its motives,” he said.

The UN Security Council hit Tehran with a fourth set of sanctions on June 9 over its nuclear program, and the United States and European Union followed up with tougher punitive measures targeting Iran’s banking and energy sectors.

US Secretary of State Hillary Clinton has said the United States remains “open to engagement” with Iran, but told The New York Times that Iran has “to reassure the international community by words and actions as to what their nuclear program is intended for.”

The Guardian: In the bowels of Iran's uranium conversion...