Reuters: The head of the U.N. atomic watchdog said on Monday Iran’s rejections of experienced nuclear inspectors was hampering the agency’s work in the Islamic state, but Tehran flatly rejected the accusation. 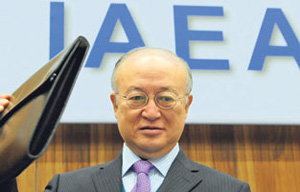 VIENNA (Reuters) – The head of the U.N. atomic watchdog said on Monday Iran’s rejections of experienced nuclear inspectors was hampering the agency’s work in the Islamic state, but Tehran flatly rejected the accusation.

The dispute over the inspectors has added to international concern about Iran’s nuclear energy programme, which Western powers suspect is aimed at developing bombs. Iran denies this, saying it is enriching uranium only for generating electricity.

Iran barred two inspectors of the International Atomic Energy Agency in June. It also refused access to the IAEA’s chief inspector for the Middle East region in 2006 and has objected to a number of other appointments in the past.

“I learned with great regret about Iran’s decision to object to the designation of two inspectors who recently conducted inspections in Iran,” IAEA Director General Yukiya Amano said in a speech to its 35-nation governing board.

Iran has accused the two of distributing “false” information about its nuclear activities. But Amano told the board he had full confidence in their “professionalism and impartiality”.

“Iran has not provided the necessary cooperation to permit the Agency to confirm that all nuclear material in Iran is in peaceful activities,” he said.

“Iran’s repeated objection to the designation of inspectors with experience in Iran’s nuclear fuel cycle and facilities hampers the inspection process.”

According to a copy of his speech provided to journalists outside the closed-door meeting, he urged Iran to reconsider a decision in January 2007 to not accept 38 agency inspectors.

Soltanieh, who criticised the IAEA’s latest report on Iran as unbalanced and as damaging to its credibility, said the IAEA had more than 150 inspectors at its disposal for Iran and that Tehran had recently approved an additional five.

The report said Iran was pushing ahead with its nuclear work in defiance of tougher sanctions, and voiced growing frustration over what the IAEA sees as Iran’s failure to address concerns about possible military dimensions to its activities.

Iran has the right to refuse certain inspectors under its non-proliferation accord with the IAEA. But Western diplomats said repeated rejections would chill nuclear safeguards work because inspectors would fear reprisals if they reported candidly on certain aspects of Iran’s activity.

They say Iran seems to be targeting the most experienced IAEA inspectors, unlike some other countries which deny access primarily to nationals from states which have not signed the nuclear Non-Proliferation Treaty.

If Iran continues to refuse inspectors it could face diplomatic consequences at the IAEA, whose governors referred Iran’s dossier to the U.N. Security Council in 2006 over its nuclear secrecy and lack of full cooperation.

Ties between Iran and the IAEA have become more strained since Amano took over as head of the agency in December.

The Japanese diplomat has taken a sharper approach on Iran than his predecessor Mohamed ElBaradei, with the IAEA saying in recent reports that Iran could be trying to develop a nuclear-armed missile now, and not just in the past.

Iran has accused Amano of issuing misleading and politicised reports about its nuclear programme.

“We have already requested that the Director General gives a balanced report in order to make sure that the credibility and impartiality of the agency is not in jeopardy,” Soltanieh said.

Message From Maryam Rajavi About the 1988 Massacre of 30,000 Political Prisoners in Iran