AFP: The European Union’s foreign affairs chief Catherine Ashton, who represents world powers in nuclear talks with Iran, on Thursday proposed a new round of meetings in Vienna next month. 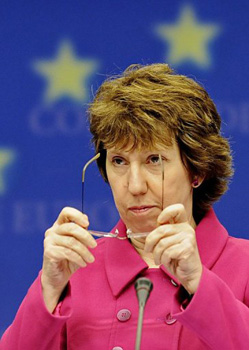 BRUSSELS (AFP) — The European Union’s foreign affairs chief Catherine Ashton, who represents world powers in nuclear talks with Iran, on Thursday proposed a new round of meetings in Vienna next month.

The EU High Representative for foreign policy, who has come under fire from Tehran for being inactive in efforts to resume the deadlocked talks, suggested they take place over three days in mid-November, a spokesperson for her office said.

The offer was made “following recent positive indications from Iran” that its top nuclear negotiator, Saeed Jalili, was willing to meet Ashton on behalf of the E3+3 group of countries — Britain, China, France, Russia, the United States and Germany.

Ashton “hopes Mr Jalili will respond positively and looks forward to constructively engaging with Iran next month”, the spokesperson said.

Dialogue between Iran and the six powers has been stalled since October 2009, when the two groups met in Geneva.

The negotiations aim to address international suspicions that Iran is seeking to develop atomic weapons under the guise of a civilian nuclear programme, a charge Tehran vehemently denies.

The UN Security Council on June 9 reinforced economic sanctions against Iran over the issue.

In offering to kickstart the dialogue once again, Ashton is moving to regain a grip over the contentious issue after coming under question from Tehran.

He is likely to meet Ashton in Brussels on Friday, where he is expected to take part in an international meeting on aid to Pakistan which she is chairing.

But this week Tehran blamed Ashton for the deadlock.

“If she is really eager for negotiations, she should be more active,” he insisted, adding that her predecessor Javier Solana was “more active”.

“We have announced our readiness for negotiations. But the other side … is not really following up, or is not serious” about resuming the dialogue, he said.

A senior Western diplomat who asked not to be identified said on the sidelines of the UN general assembly last month that the problem ran deeper.

“The Iranians refused Ashton’s offer (of talks). They don’t see Ashton as decisive,” said the diplomat, who asked not to be identified.

But on Thursday, US Secretary of State Hillary Clinton roundly supported Ashton’s role as global negotiator in the talks.

“With the potential for negotiations beginning because of Iran’s reaching out to Cathy, Cathy will be leading the international community in those negotiations,” Clinton said in a joint interview with Ashton for the BBC, that will be broadcast Friday.

“Of course it will be me that will, on behalf of this group of countries, lead the negotiations,” Ashton said.

“What we’re doing … is now moving towards trying to get into a serious dialogue with Iran,” Ashton added.

Bloomberg: Iran’s Islamic Azad University, which has more than...