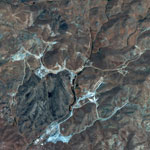 AP: Iran is poised to greatly expand uranium enrichment at a fortified underground bunker to a point that would boost how quickly it could make nuclear warheads, diplomats tell The Associated Press. By GEORGE JAHN, Associated Press

VIENNA (AP) — Iran is poised to greatly expand uranium enrichment at a fortified underground bunker to a point that would boost how quickly it could make nuclear warheads, diplomats tell The Associated Press.

They said Tehran has put finishing touches for the installation of thousands of new-generation centrifuges at the cavernous facility — machines that can produce enriched uranium much more quickly and efficiently than its present machines.

While saying that the electrical circuitry, piping and supporting equipment for the new centrifuges was now in place, the diplomats emphasized that Tehran had not started installing the new machines at its Fordo facility and could not say whether it was planning to.

Still, the senior diplomats — who asked for anonymity because their information was privileged — suggested that Tehran would have little reason to prepare the ground for the better centrifuges unless it planned to operate them. They spoke in recent interviews — the last one Saturday.

The reported work at Fordo appeared to reflect Iran’s determination to forge ahead with nuclear activity that could be used to make atomic arms despite rapidly escalating international sanctions and the latent threat of an Israeli military strike on its nuclear facilities.

Fordo could be used to make fissile warhead material even without such an upgrade, the diplomats said.

They said that although older than Iran’s new generation machines, the centrifuges now operating there can be reconfigured within days to make such material because they already are enriching to 20 percent — a level that can be boosted quickly to weapons-grade quality.

Their comments appeared to represent the first time anyone had quantified the time it would take to reconfigure the Fordo centrifuges into machines making weapons-grade material.

In contrast, Iran’s older enrichment site at Natanz is producing uranium at 3.4 percent, a level normally used to power reactors. While that too could be turned into weapons-grade uranium, reassembling from low to weapons-grade production is complex, and retooling the thousands of centrifuges at Natanz would likely take weeks.

The diplomats’ recent comments came as International Atomic Energy Agency inspectors are scheduled to visit Tehran on Sunday. Their trip — the second this month — is another attempt to break more than three years of Iranian stonewalling about allegations that Tehran has — or is — secretly working on nuclear weapons that would be armed with uranium enriched to 90 percent or more.

Diplomats accredited to the IAEA expect little from that visit. They told the AP that — as before — Iran was refusing to allow the agency experts to visit Parchin, the suspected site of explosives testing for a nuclear weapon and had turned down other key requests made by the experts.

Iranian officials deny nuclear weapons aspirations, saying the claims are based on bogus intelligence from the U.S. and Israel.

But IAEA chief Yukiya Amano has said there are increasing indications of such activity. His concerns were outlined in 13-page summary late last year listing clandestine activities that either can be used in civilian or military nuclear programs, or “are specific to nuclear weapons.”

Among these were indications that Iran has conducted high explosives testing and detonator development to set off a nuclear charge, as well as computer modeling of a core of a nuclear warhead. The report also cited preparatory work for a nuclear weapons test and development of a nuclear payload for Iran’s Shahab 3 intermediate range missile — a weapon that could reach Israel.

Iran says it is enriching only to make nuclear fuel. But because enrichment can also create fissile warhead material, the U.N. Security Council has imposed sanctions on Tehran in a failed attempt to force it to stop.

More recently, the U.S., the European Union and other Western allies have either tightened up their own sanctions or rapidly put new penalties in place striking at the heart of Iran’s oil exports lifeline and its financial system.

The most recent squeeze on Iran was announced Friday, when SWIFT, a financial clearinghouse used by virtually every country and major corporation in the world, agreed to shut out the Islamic Republic from its network.

Diplomats say the choke-holds are being applied in part to persuade Israel to hold off on potential military strikes on Iranian nuclear facilities — among them Fordo, a main Israeli concern because it is dug deep into a mountain and could be impervious to the most powerful bunker busting bombs.

Diplomats told the AP earlier this month that Iran had added two new series or cascades of old-generation IR-1 centrifuges to its Fordo operation, meaning 348 centrifuges were now operating in four cascades.

Olli Heinonen, who retired last year as the IAEA’s chief Iran inspector, recently estimated that these machines, and two other cascades at Natanz can produce around 15 kilograms (more than 30 pounds) of 20-percent enriched uranium a month, using Iran’s tons of low-enriched uranium as feedstock.

But he suggested “an altogether different scenario” — a much quicker pace of enrichment to levels easily turned into weapons-capable uranium if Iran starts using newer, more powerful centrifuges at Fordo. That, said the diplomats, is exactly what Iran appears to be on the verge of doing by finishing preparatory work recently for new centrifuge installations.

Just three days ago Iran’s semiofficial Fars agency reported that a “new generation” of Iranian centrifuges had gone into operation at Natanz, in central Iran.

A diplomat accredited to the IAEA, which monitors Iran’s known nuclear programs, said the “new generation” of centrifuges appeared to be referring to about 65 IR-4 machines that were recently set up at an experimental site at Natanz.

Fordo, which can house 3,000 centrifuges, was confidentially revealed to the IAEA by Iran in 2009, just days before the U.S. and Britain jointly announced its existence.

Iran announced last year that it would move its 20-percent uranium production to Fordo from Natanz and sharply boost capacity. It started making higher grade material two years ago saying it needed it to fuel a research reactor.

But the U.S. and others question the rationale, pointing out that Iran rejected offers of foreign fuel supplies for that reactor and is making more of the higher-enriched material than that small reactor needs.

New York Times: An influential hard-line newspaper has made...

Reuters: The British envoy to Tehran on Sunday requested...