AP analysis: Iran may be pushing to nuke threshold

AP: They are enriching uranium far beyond what’s needed for their lone energy reactor and preventing inspection, adding to the urgency while repeatedly predicting Israel will be destroyed and actively supporting militancy in the region. 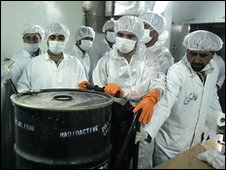 Iran’s denials — while forceful and delivered from the pinnacle of its ruling Islamic system — can carry a distinctly hollow ring among its foes as the U.N. nuclear watchdog piles on worries: Complaining about limits on inspection access and reporting that Tehran is expanding its nuclear fuel labs in a virtually attack-proof underground site.

They are enriching uranium far beyond what’s needed for their lone energy reactor and preventing inspection, adding to the urgency while repeatedly predicting Israel will be destroyed and actively supporting militancy in the region.

But, as Israel increasingly weighs the option of a military strike, Western leaders wary of another Middle East conflict may have to pay closer attention to the claims by supreme leader Ayatollah Ali Khamenei and others. Quite possibly, they may be telling the truth. Or at least to a point.

Iran could be shaping its nuclear ambitions after Japan, which has the full scope of nuclear technology — including the presumed ability to produce warhead-grade material — but has stopped short of actually producing a weapon. It creates, in effect, a de facto nuclear power with all the parts but just not pieced together.

Larijani met with Japanese officials and praised the country’s nuclear program as a symbol of a third path that dates back to the 1970s, when then Japanese Prime Minister Tsutomu Hata told reporters that Japan “certainly” could possess nuclear arms “but has not made them.”

The major difference, however, is Israel and other U.S. allies, such as Saudi Arabia. They would have to adapt to a huge balance-of-power shift with Iran on the doorstep of having nuclear arms.

Following Japan’s path would allow Iran to push their nuclear technology to the limit while being able to claim it has adhered to its international pledge not to develop a bomb.

Yoel Guzansky, an Iranian affairs expert for Israel’s Institute of National Security Studies, believes Iran could be adopting a Japan-style policy to reach a “nuclear threshold.”

“Israeli can’t live with the uncertainty of a nuclear threshold state,” he said. “Iran could push over (to weapons capability) at any given moment.”

The world, however, has absorbed the game-changing nuclear arms development of states such as China and Pakistan. Israel, too, is believed to have a nuclear arsenal although officials neither confirm nor deny its existence.

This is where Iran might seek seams in the unity of the West and its allies: Could some live with an almost-armed Iran rather than risk a war that could send oil prices skyrocketing and risk spilling conflict across the region?

On Thursday, Israeli Prime Minister Benjamin Netanyahu said he would make his anti-Iran case “in a clear voice” later this month at the U.N. General Assembly, which is expected to include Iranian President Mahmoud Ahmadinejad as head of the Iranian delegation.

“We’ve heard all these stories from the Iranians,” said Paul Hirschson, an Israeli foreign ministry spokesman. “Nobody believes (Khamenei) … There is no other explanation other than a nuclear military program.”

Khamenei gives a wholly different portrayal — which, if nothing else, adds to pressure on Israel to allow time for Western sanctions to possibly force concessions from Iran.

“I declare that the Islamic Republic of Iran has never been after nuclear weapons and it will never abandon its right for peaceful use of nuclear energy,” Khamenei told a gathering of the 120-member Nonaligned Movement in Tehran on Thursday.

The group, which includes mostly developing nations in Asia, Africa and South America, was an especially receptive audience. The summit’s final communique Friday said all countries had the right to development and use of nuclear energy for peaceful purposes. It notably cited Iran.

Khamenei and other Iranian officials strongly push the belief that nuclear technology should not just be in the hands of a few countries, but available to all under U.N. treaties. It’s part of Iran’s wider efforts to become a scientific leader to challenge the West in areas such as aerospace and military systems.

Iran on Saturday signed a scientific and technological cooperation agreement with North Korea, which is already believed to have assisted Iran in missile development.

Khamenei earlier this week also repeated his view that pursuit of nuclear weapons violates Islam and is a “big and unforgivable sin.”

The U.S. and allies seek to roll back Iran’s nuclear enrichment program, which they fear could eventually lead to atomic weapons.

But Khamenei’s address suggested that Iran could push its enrichment beyond levels needs for medical applications and its lone energy-producing reactor. Already, military commanders have discussed plans for a nuclear-powered sub, which would need uranium at near weapons grade.

A report Thursday by the U.N.’s International Atomic Energy Agency concluded that Iran now has 1,000 uranium-enrichment centrifuges at the subterranean Fordo site south of Tehran — more than double the number since May. Fordo is still small compared with Iran’s main enrichment facility, but it is considered to have more advanced equipment and is protected under 90 meters (300 feet) of mountain rock.

The report also said Iran has effectively shut down inspections of a separate site — the Parchin military complex — suspected of being used for nuclear weapons-related experiments, by shrouding it from spy satellite view with a covering.

But a report by the Washington-based Center for Strategic and International Studies said the latest U.N. nuclear report raises the prospect of a deepening standoff.

“The IAEA reports Iranian actions that raise growing questions about whether Iran will ever agree to meaningful disclosure, inspection and other verification measures covering its nuclear efforts,” wrote Anthony Cordesman, a Mideast expert at the center.

Brian Murphy is bureau chief in Dubai and has covered Iranian affairs for more than 12 years. Associated Press writer Daniel Estrin in Jerusalem contributed to this report.

AP: The European Union is accusing Iran of possessing...