Iran could not divert uranium without being detected:US

AFP: Iran could not produce enough highly-enriched uranium for an atomic bomb without being detected, US National Intelligence Director James Clapper said Tuesday. 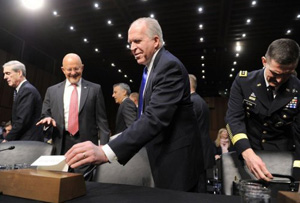 While Iran has made strides in its nuclear program, “we assess Iran could not divert safeguarded material and produce a weapon-worth of WGU (weapons-grade uranium) before this activity is discovered,” Clapper said in an annual report to Congress on global threats.

Iran’s declared nuclear sites are subject to monitoring from the UN’s atomic watchdog, the International Atomic Energy Agency, as well as clandestine surveillance from US and other spy services.

The US intelligence assessment, however, found that Iran has moved forward with its uranium enrichment efforts.

“Of particular note, Iran has made progress during the past year that better positions it to produce weapons-grade uranium (WGU) using its declared facilities and uranium stockpiles, should it choose to do so,” the report said.

The assessment reiterated an analysis last year from intelligence agencies that Iran had not yet opted to build nuclear weapons and that the regime’s policy was based on a “cost-benefit” approach.

“We do not know if Iran will eventually decide to build nuclear weapons,” he said.

But because Iranian leaders put a high priority on preserving their power and would carefully weigh the risks of obtaining nuclear weapons, the United States and its allies had an opportunity to exert influence over Tehran’s ultimate decision, he said.

The American intelligence community also believed Iranian leaders are not seeking a direct confrontation with the United States, the report said.

Reuters: U.S. intelligence has no plans to revise an...