Reuters: An exiled Iranian opposition group said on Monday it had information about an underground nuclear site being built in Iran and that this was among a number of secret venues for an atomic bomb programme. 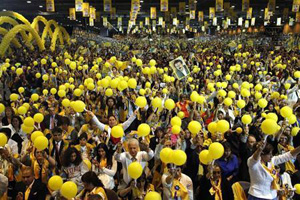 PARIS (Reuters) – An exiled Iranian opposition group said on Monday it had information about an underground nuclear site being built in Iran and that this was among a number of secret venues for an atomic bomb programme.

The National Council of Resistance of Iran exposed Iran’s uranium enrichment plant at Natanz and a heavy-water facility at Arak in 2002. But analysts say the NCRI has a mixed track record and a clear agenda of regime change in Tehran.

The Islamic Republic and six world powers will resume negotiations on Wednesday aimed at agreeing the first stage towards a comprehensive deal to end a decade-long standoff with Tehran defusing fears that it could develop nuclear weapons.

Iranian authorities deny any such intention, saying their nuclear programme is for peaceful energy only. A diplomatic window to a peaceful solution of the dispute was opened by the election in June of moderate Hassan Rouhani as president.

The Paris-based NCRI said members of its affiliated People’s Mujahideen Organisation of Iran (PMOI) inside the country had obtained reliable information on a new and covert site designated for Iran’s nuclear project. But it had no details of what kind of nuclear activity was being carried out there.

“According to specific information obtained by the Iranian resistance, the clerical regime is establishing or completing parallel secret and undeclared sites for its nuclear project,” NCRI official Mehdi Abrichamtchi told reporters.

Accusations the NCRI made in July and October about secret nuclear sites drew a wary international response, while the United States expressed scepticism about another claim in 2010.

The NCRI said the new site was inside a 600-metre tunnel complex beneath mountains 10 km (6 miles) from the town of Mobarekeh, adjacent to the Isfahan-Shiraz highway, within the existing Haft-e Tir military industrial complex.

Abrichamtchi said work on the site began in 2005 and the construction of tunnels ended in early 2009. Work on the facilities was recently completed, he said.

Abrichamtchi said Iran’s Organisation of Defensive Innovation and Research handled Iran’s sensitive nuclear activity and also managed the new facility. The site had extra security compared to the rest of the military complex, he said.

Abrichamtchi said the information had been sent to the International Atomic Energy Agency, the U.N. nuclear watchdog. The IAEA had no immediate comment on the report.