Reuters: The U.N. nuclear watchdog appears to have made only limited progress so far in getting Iran to answer questions about its suspected atomic bomb research. Under an accord reached by the U.N. agency and Iran in November in an attempt to revive the long-stalled investigation, Tehran agreed in May to carry out five specific steps by Aug. 25 to help allay international concerns. 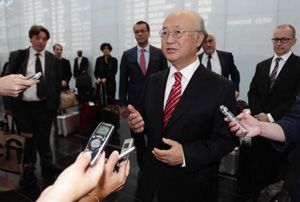 VIENNA (Reuters) – The U.N. nuclear watchdog appears to have made only limited progress so far in getting Iran to answer questions about its suspected atomic bomb research, diplomatic sources said on Friday, three days before a deadline for cooperation.

Under an accord reached by the U.N. agency and Iran in November in an attempt to revive the long-stalled investigation, Tehran agreed in May to carry out five specific steps by Aug. 25 to help allay international concerns.

They include providing information about two issues – for example, alleged explosives experimentation – that are part of the inquiry by the International Atomic Energy Agency (IAEA) into what it calls the possible military dimensions of Iran’s nuclear programme, which Tehran says is peaceful.

The diplomatic sources said Iran and the IAEA may have begun discussing the two topics, but they did not believe Tehran had provided the requested information or explanations yet.

They said there was still time for Iran to implement the measures, noting that it had occasionally waited until the last minute to make concessions in the past.

But slow-paced cooperation would tend to reinforce Western impressions that Iran is reluctant to give the IAEA the information and access to sites and people that it says it needs for its investigation.

There was no immediate comment from the IAEA or Iran.

Iran denies the nuclear programme has any military objectives, but it has promised since Hassan Rouhani, a pragmatist, was elected Iranian president in mid-2013 to work with the IAEA to clarify its concerns.

Western officials say it is central for Iran to address the suspicions for the chances of a successful outcome of the parallel talks on a diplomatic settlement between Iran and the United States, France, Germany, Britain, China and Russia.

With major gaps remaining over what will be permitted in Iran’s uranium-enrichment programme – activity which can have both civilian and military uses – those negotiations on ending the decade-old dispute were extended last month until Nov. 24.

IAEA Director General Yukiya Amano said after he held talks in Tehran on Sunday that implementation of the five steps had begun and that he expected progress to be made over the coming week, but he did not give details.

Speaking after talks with Rouhani and other senior officials, he said he had received a “firm commitment” by Iran to cooperate with the long-running investigation. He also said he hoped for an agreement soon on future steps by Iran.

Amano’s trip to Tehran was an apparent attempt to push for progress, after diplomatic sources in July said that the IAEA was concerned about Iran’s lack of engagement with the probe.

After years of what the West saw as Iranian stonewalling, Iran as a first step in May gave the IAEA information it had requested about Tehran’s reasons for developing exploding bridge wire detonators, which can be used to set off atomic explosive devices. Iran says they are for civilian use.

The two issues in the inquiry that Iran agreed to address by late August concern alleged experiments on explosives that could be used for an atomic device and studies related to calculating nuclear explosive yields.

They were among 12 specific areas listed in an IAEA report issued in 2011 with a trove of intelligence indicating a concerted weapons programme that was halted in 2003, when Iran came under increased international pressure. The intelligence also suggested some activities may later have resumed.

(This story was refiled to fix garbled formatting in second paragraph.)

1,000 arrested after police and Sufis clash in Iran

Reuters: Iranian police have arrested around 1,000 people in...