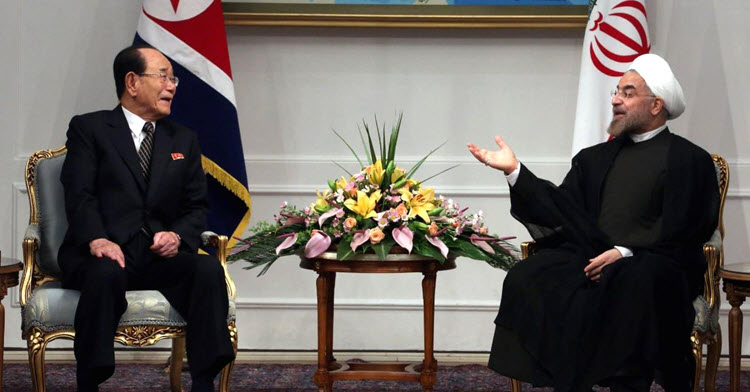 London, 10 Nov – The growing relationship between Iran and North Korea may prove to be the biggest threat to Donald Trump.

As the US gets tough on the two rogue nations through the imposition of further sanctions and a more confrontational policy, it may well lead to a stronger relationship between the ‘axis of evil’.

During his visit to South Korea, Trump urged the North Koreans to abandon their nuclear programme (which is being funded by Iran) rather than testing his patience.

Indeed, that was one of Iran’s mistakes. Last month, Trump made his strongest move yet against the Iranian Regime by decertifying their compliance with the Iran nuclear deal (also known as the Joint Comprehensive Plan of Action or JCPOA). It is now up to Congress to decide whether or not to reimpose sanctions against the Regime.

Some fear that Iran and North Korea may be pushed closer together by the US’s stance and could embark on a collaborative military relationship that will boost the production of ballistic missile and nuclear weapons technologies.

They even raise the possibility that in North Korea’s finances are attacked, they would sell their nuclear information to Iran.

This could spark a new nuclear crisis in the Middle East and encourage other nations, like Saudi Arabia, to develop their own nuclear programmes in response.

Dr. Jeffrey Lewis, director of the East Asia Nonproliferation Program at the Middlebury Institute of International Studies at Monterey in California, said: “[The Iranians] can do everything North Koreans have done and more. And they can do it much, much faster…. They’re not going to start with some lousy fission device. They’ll go straight to a missile-deliverable nuclear weapon, and then they’ll follow that with a thermonuclear weapon, and it will happen so fast it will make our heads spin.”

However, there is a lot of evidence that suggests that the two states are already collaborating on their ballistic missile programmes (sharing technology and attending eash other’s launches) and have been working together on other military pursuits since the 1980s, when North Korea supplied Iran with Soviet ballistic missiles during the Iran-Iraq war.

Tom Karako, senior fellow and director of the Missile Defense Project at the Center for Strategic and International Studies, said: “It’s possible they’re just there in the bleachers watching these things for the entertainment, but I doubt it. I suspect when you see high-ranking Iranian officials at a military parade in Pyongyang, or at missile test exercises, they’re not there for the Korean food.”