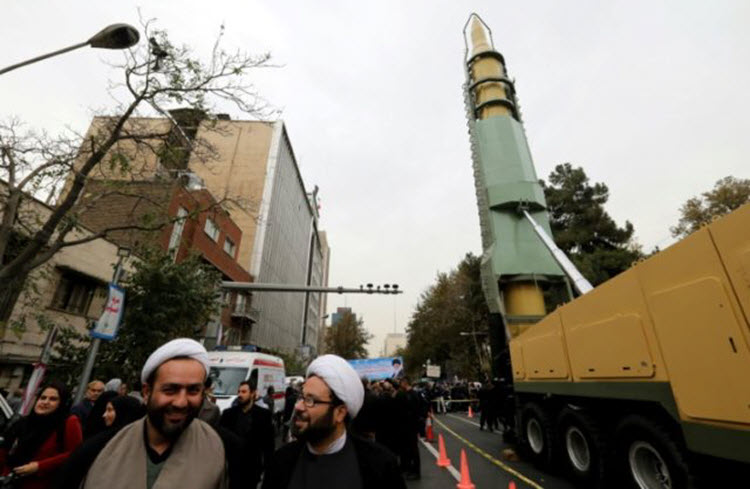 London, 14 Feb – The Iran has unveiled a range of nuclear-capable ballistic missiles at this weekend’s military parades, despite a UN resolution against developing those missiles.

The nuclear-capable missile appears to be similar to North Korean technology, according to experts, and according to Iran it has radar-evading capability and can even strike Israel from Iranian territory.

As such, it looks like these missiles will further inflame tensions between Israel and Iran, given that the Iran fuels terrorist proxies on Israel’s borders and could easily supply the groups with these missiles as they do for the Houthis against Saudi Arabia.

These tensions were most recently visible this past weekend when Iran instigated an attack on Israel which led to the downing of an Israeli fighter jet in Israeli airspace. When these missiles were first tested by Iran, they were daubed with anti-Israel slogans so one can see what Iran wants to use them for.

Behnam Ben Taleblu, an Iran expert with the Foundation for Defense of Democracies, said: “The Fajr-5 is an Iranian rocket that has been proliferated to anti-Israel groups like Hamas and Hezbollah. It can travel up to 75 km, and is therefore a long-range artillery rocket. It uses solid fuel for propulsion. Both the Qadr missile and Fajr rocket represents Iran’s commitment to developing stand-off weaponry that it uses for purposes of deterrence and coercion.”

Many experts also see the unveiling of these missiles as a move to boost Iran during the ongoing people’s protests, which call for less military spending among other things. Conservative estimates reveal that the Iran spent at least $16 billion on military build-up and foreign wars in recent years.

Ben Taleblu said: “Thirty-nine years in, the Islamic Revolution has little to show for its decades in power other than growing the country’s asymmetric military capabilities in order to continue their export of the revolution. The Islamic Republic has considerably grown the country’s missile and rocket arsenal, both through production and procurement.”

These new weapons could encourage Congress to go ahead with their crackdown on Iran’s continued proliferation of ballistic missile technology, which violates the 2015 nuclear deal and the UN resolution enshrining it.

The Trump administration is currently attempting to fix the 2015 nuclear deal, and insists that the US must also focus on restricting Iran’s access to ballistic missile technology.

However, the overwhelming answer to getting dangerous technology out of Iran’s hands is to support the people’s call for regime change and democracy in Iran.

The price of goods in Iran has risen to...