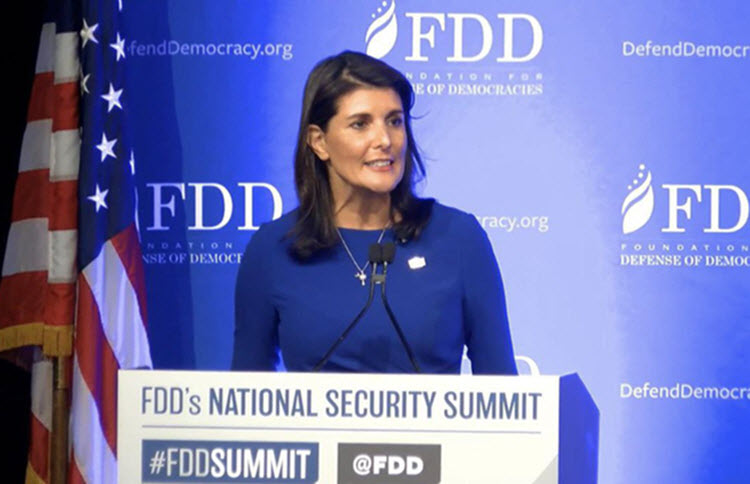 London, 29 August – Nikki Haley, the US Ambassador to the UN, said on Tuesday at an event organised by the Foundation for Defense of Democracies in Washington, DC, that she “never thought the Iran deal could be fixed”.

She said that the months that the Donald Trump administration spent consulting with other countries on the Obama-era deal could have made it a better deal, but they “couldn’t change it to be a good deal”.

Haley explained that the deal was so problematic because it didn’t do enough to get them to end their nuclear weapons programme; in fact, the “millions of dollars” in economic relief to Iran didn’t even encourage them to stop their ballistic-missile testing, the sale of arms, or support of terrorism. Haley said that the US wouldn’t be able to stop Iran once it acquired nuclear weapons and that she saw Iran as the next North Korea.

She said: “I look at [Iran] as the next North Korea. If you continue to fund this, and they continue to do these bad acts, and no one holds them accountable, we one day are going to be talking about Iran the same way we talk about North Korea.”

Haley said that the US is not the only country that sees the Iran deal as fundamentally flawed, even though it looks like that to the outsider.

She said: “Honestly the other countries [who were parties to the Iran deal] came to me and said ‘We know. You’re right.’ But because everybody loves the deal, and their handprints are on it, and they have to say it was successful, they were tiptoeing around all of these things. They just don’t want to admit they were wrong [even though] they had good intentions.”

In May, Trump withdrew from the nuclear deal and promised new sanctions against Iran, after months of speculation about the deal’s future. He’d been critical of the “worst deal ever” whilst on the campaign trail and vowed to rip it up once in office.

In November 2017, he declared that Iran was not compliant with the terms of the nuclear deal, citing evidence from the Iranian Resistance and the deal spent six months in limbo as the US Congress and the other countries involved in the deal tried to amend the deal to address Trump’s concerns, but this did not come to pass.

Iran insists it must enrich its own uranium

Reuters: Iran on Saturday insisted upon its right to...