Iran: EU Must Stop Appeasing Number One Threat to Peace and Security 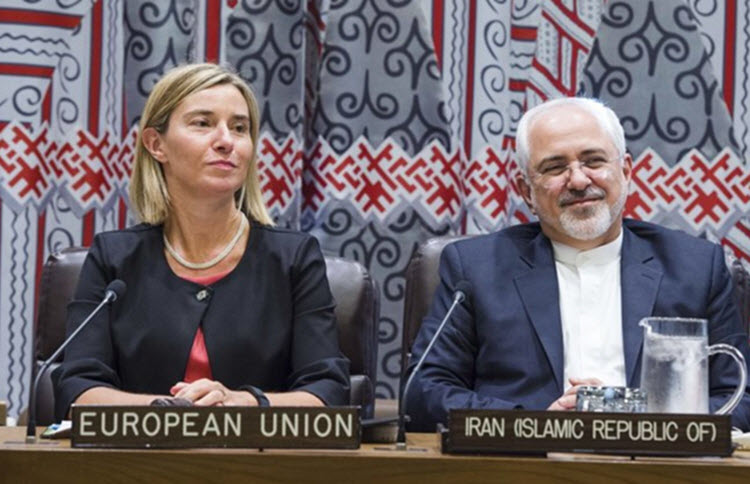 London, 6 Dec – U.S. President Donald Trump had been threatening to pull out of the Joint Comprehensive Plan of Action (JCPOA), or 2015 Iran nuclear deal as it is also known, since the beginning of his presidency. European leaders pleaded with him to keep the deal intact, trying to convince him that having a weak deal in place was better than having no deal in place.

However, Trump stuck to his guns and refused to bow to European pressure. When he announced that the United States would indeed exit the nuclear agreement, he gave a very thorough explanation as to why he came to that decision. He listed many different reasons, ranging from Iran’s support of terrorism to its belligerence in the region. He also said that he believes the nuclear agreement even actually guarantees a nuclear arms race in the Middle East.

Trump also announced that the crippling economic sanctions that were in place before the nuclear deal was signed would be reapplied. He then called on European leaders to support his decision and to join his administration in applying a maximum pressure campaign on Iran.

However, the Europeans resisted and scrambled to appease Iran. Iran threatened to leave the deal too and called on the European Union to make sure that the U.S. sanctions do not have an impact on Iran’s business dealings with European companies. The EU did assure Iran that it would take steps to make sure that European companies were not caught up in the sanctions, but by this time, many businesses decided that it was not worth the risk. It appears that the decision between staying on the good side of the United States, the largest global financial power, was preferable to maintaining business ties with Iran. And they were quite right to do so considering that their funds could be used to finance terrorist operations and groups.

The European Union announced that it would be setting up a SPV – a “Special Purpose Vehicle” that would basically circumvent the U.S. sanctions. One issue, however, is that no European country has offered to host the SPV. And Brian Hook, the U.S. special representative for Iran, warned the EU that any of its countries that host the SPV run the risk of being sanctioned. He said: “The United States will not hesitate to sanction any sanctionable activity in connection with our Iran sanctions regime.”

President Trump’s predecessor – Barack Obama – like Europe, led policies of appeasement towards Iran. However, these were a complete failure and did nothing more than make Iran bolder than ever because it knew that the Obama administration would turn a blind eye to all of its belligerence.

It is time that the Europeans learn the lessons of the past and support the pressure that is being put on Iran. What harm will it do to put economic pressure on a regime that is the number one threat to peace and security in the region?