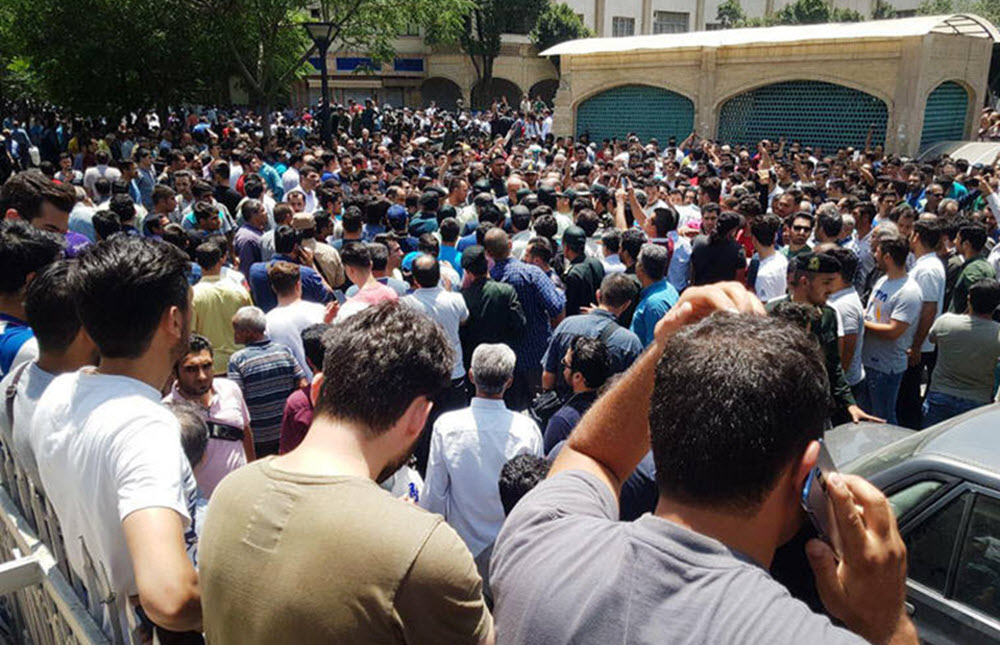 Tehran Bazaar remained closed for a fourth continuous day as protestors maintained their positions on Wednesday, June 27th. All of Tehran’s major shopping districts, including the Grand Bazaar, the Goldsmith’s Bazaar, Mellat Avenue, Mowlavi, and the Aladdin Mall, among others, remained shuttered as stall owners and merchants refused to open their stores and begin trading.

On the fourth day, the traders at Saadat joined the strike, with workers closing up and leaving a placard in the entrance which read, “tired of high prices and inflation”. It is the same story across Iran as the merchants at Yaft Abad blocked the adjacent road in protest.

The Situation is Dire

Iran’s merchants and shopkeepers have been left with little choice. The mullahs’ mismanagement of the economy has left the Iranian currency 50% weaker against the dollar than it was six months ago. The weaker currency has left shopkeepers paying higher rates for imported goods, eating into their profits, and putting their livelihoods in danger.

The Mullahs are Intimidating the Protesters

In an attempt to bring the situation back under their control, regime officials have resorted to public threats and intimidation tactics. Sadegh Larijani, Judiciary Chief of the clerical regime, said the demonstrators in Tehran would face “decisive action” and “execution”.

Lower-level officials on the ground have adopted the same violent approach towards the protesting merchants. Reports of the regime’s forces abducting protestors and bundling them into vehicles have emerged. The regime has garrisoned repressive forces in Baharestan Square and the areas around parliament to protect their assets.

To placate the protests and stop their spreading, Rouhani has been under pressure to shuffle members of his cabinet. But he has refused to do so up until now.

He may be right to think that a symbolic gesture will not silence the Iranian public. Rouhani and the regime itself caused the economic crisis that has engulfed Iran. Minor personnel changes in the cabinet will not rectify the situation.

The timing of the protests is no coincidence. On June 30th, the Iranian opposition, the National Council of Resistance of Iran (NCRI) and the People’s Mujahedin Organisation of Iran (MEK), will convene in Paris with supporters from around the world for their annual gathering.

President-elect of the NCRI, Maryam Rajavi, will address those in attendance and rally support for the Iranian opposition from the international community. Last year’s “Free Iran” Rally attracted more than 100,000 opponents of the Iranian regime. Iranians living in Europe, North America and Asia, as well as allies and those sympathetic to the MEK and NCRI’s cause, arrived to hear the speakers talk.

The purpose of the event is to give the Iranian people a platform to air their grievances. It is designed to provide a voice for the merchants in Tehran, the farmers in Isfahan, the teachers, students, investors, factory workers, and truck drivers across Iran who are crying out for regime change.

Free Iran will show the world what Iran could achieve if it were free of the yoke of the mullahs. It will highlight the prospect of a free and democratic Iran, an Iran free from the regime’s violence, repression, and plunder. The world’s eyes will be on the Paris Rally, and the MEK, the NCRI and Maryam Rajavi will speak up for the Iranian population’s suffering.

Iran Focus: A new wave of crackdown against young...