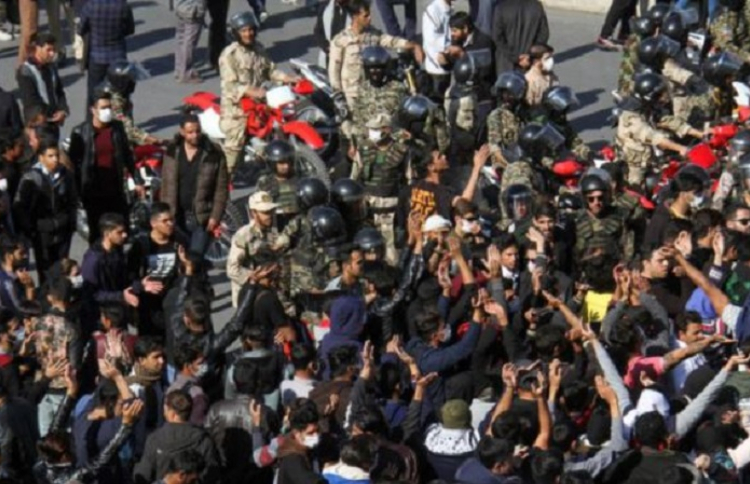 The Iranian people came out into the streets for the 10th day of the uprising on Sunday, despite the presence of herds of Revolutionary Guards (IRGC), the paramilitary Bassij, the State Security Force (SSF), plainclothes agents, and Intelligence Ministry agents.

In Tenranpars, east Tehran, there were a number of demonstrations, clashed and hit-and-run skirmishes between the people and the suppressive forces, which led heavily armed agents to block streets leading to the area to prevent the spread of the protests. While in Mallard and Fardis, western Tehran, the situation is reported to be extremely tense and suppressive forces have taken positions in the streets.

Elsewhere in Tehran, students from the Science and Technology University protested poor living conditions and invasive security measures, while all across the city, Resistance Units has plastered up posters of Resistance Leader Massoud Rajavi.

In Isfahan, people gathered in Kaveh street and clashed with the Special Anti-Riot units and plainclothes agents. They also blocked Aban Street and staged a protest there. Clashes are also common in Sirjan where many young people have taken to the streets in darkness to battle the suppressive forces.

While SSF agents in Shiraz have been ordered to remain in their police stations until further notice because of fears that protesters might attack the police precincts.

The protests, which began on Friday, November 15 over a sharp increase in fuel prices, quickly became an anti-regime uprising that took over 165 cities. The people are demanding the overthrow of the government and citing Supreme Leader Ali Khamenei, President Hassan Rouhani and the IRGC as the source of all of Iran’s problems.

At least 300 are reported dead, 4,000 injured, and 10,000 arrested. The authorities are trying to cover up the deaths by stealing the bodies from hospitals and placing them in unknown locations, while their prison system cannot hold that many people and the authorities are forced to place protesters in other government buildings, such as schools. Video footage is circling online of security forces marching blindfolded and handcuffed protesters into a school, in violation of international conventions.

The National Council of Resistance of Iran wrote: “The inhumane clerical regime in Iran continues a widespread campaign of reprisals and lawless detentions throughout the country in response to the widespread uprising that began on November 15.”

The previous day, there had been major protests in the cities of Fardis, Orumiyeh, Shiraz, and areas around the port of Mahshahr.

US calls on Iran to release Christian pastor

AFP: The United States on Monday called on Iran...

Iran brushes aside new US sanctions

AFP: Iran on Saturday brushed aside newly-imposed US...