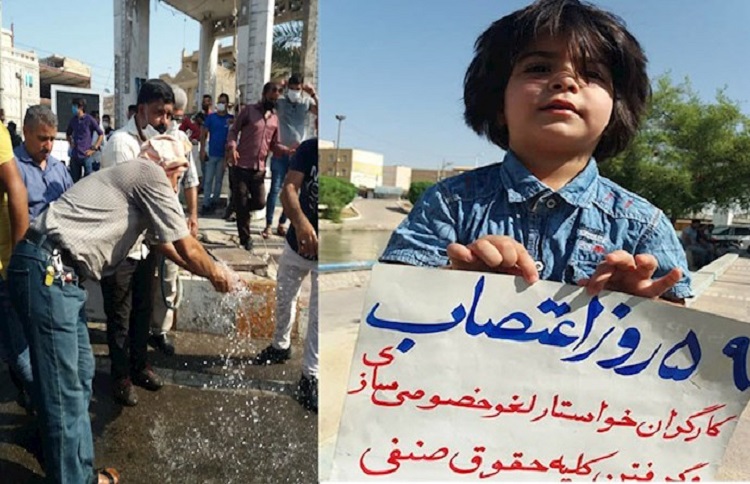 Employees of the oil, gas, and petrochemical industries in Iran continued their nationwide strike – reaching 20 cities in 12 provinces – for the 10th consecutive day on Monday, August 10.

The employees, who hail from at least 46 refineries, companies, and factories in the power sector, are on strike to protest intolerable working conditions and not having their rights respected.

They have been working in extreme heat, without the proper safety protocols to protect them, and they are also denied health insurance and pensions, so if they get injured on the job, then it’s just too bad.

The workers lack job security because they were been forced to sign temporary contracts, which is the reason they don’t have health insurance and pensions, but this also means that they can be fired at any time for any reason.

In addition to all of this, the workers have not been paid for several months, even though their wages are already so much lower than the poverty line.

The officials of the regime and the managers assigned by the state are trying to break the strike by offering hollow promises and vile threats to the workers because they are terrified that the strikes will bring the country to a halt, but workers bravely vowed to continue their strike until all their demands are met.

Maryam Rajavi, the President-elect of the National Council of Resistance of Iran (NCRI), praised the striking workers who have risen up for their rights and urged the public, especially the youth, to rise up in support. She further urged the International Labor Organization (ILO) and trade unions to condemn the regime’s anti-labor policies and to support the Iranian workers’ protests.

Some of the companies that have seen strikes are:

These strikes continued on Tuesday.

Other strikes from key sector workers that took place this week include nurses from Urmia, employees of the Health System Reform Plan, and workers of the Ahvaz Water and Sewage Company.

The nurses were protesting several month-long delays in their wage payments, alongside not being paid any overtime pay since March. They said that, in addition, their working hours had increased from 160 hours per month to 175 with no pay rise to reflect it, and that they are also forced to work 50 hours overtime per month.

Protests Across Iran Over the Past Few Days

Iran says it is in no rush to start dialogue with U.S.