Man tied to weapons trafficking via Iran seized in Kandahar

CNN: A Taliban member suspected of helping to move weapons between Iran and Afghanistan has been seized, NATO’s International Security Assistance Force said on Wednesday. 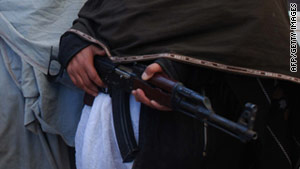 The man, captured in Afghanistan’s Kandahar province on Saturday, is thought to have facilitated weapons trafficking between Iran and Kandahar through Nimroz province, the southwestern region that borders Iran.

The Shiite-led Iranian regime and the Sunni Taliban would not seem to have a lot in common, but there have been reports this year that Iran has been planning to ship weapons to the Taliban.

“Iran continues to provide lethal assistance — including weapons and training — to elements of the Taliban,” according to a Defense Department report on Afghanistan.

“Tehran’s support to the Taliban is inconsistent with their historic relationship. However, Tehran’s actions support its overall strategy of backing many groups to ensure a positive relationship with potential leaders and hedging against foreign presence and the host government.”

This is from the 96-page “Report on Progress Toward Security and Stability in Afghanistan,” which is a required update to Congress. Covering a period from April to the end of September, it was released in November.

Many observers say that places like Iran and other nearby countries are used by arms traffickers.

As for the arrest, the man, who was not identified, was considered a” Kandahar-based weapons facilitator with direct ties to other Taliban leaders” in the province, ISAF said.

Troops conducted the operation to seize the man in a night raid and they didn’t have to fire their weapons.

Using a loudspeaker, Afghan troops called out people from targeted buildings and conducted a search.

Two other people were detained.