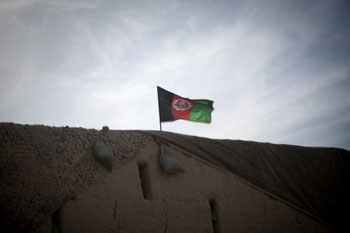 He was targeted “for facilitating the movement of weapons between Iran and Kandahar through Nimroz province,” a spokesman for the NATO-led International Security Assistance Force (ISAF) said.

It is thought he was connected to smuggling small arms between the countries.

“The now-detained man was considered a Kandahar-based weapons facilitator with direct ties to other Taliban leaders in the province,” the ISAF spokesman added in a statement.

The news again spotlights the complex relationship between Afghanistan, Iran and the United States, whose troops make up roughly two-thirds of the coalition force.

Kabul has insisted that Iran, as a neighbouring country, has a legitimate concern in helping the reconstruction and development of Afghanistan.

But some in Iran’s arch foe the US are concerned that Tehran could be funding insurgents or trying to play on anti-Western sentiment in Karzai’s government.

British newspaper The Times reported Friday that Iran has released a string of senior Al-Qaeda militants from custody so they can help the network rebuild in the Afghanistan-Pakistan border areas.

Earlier this year, it emerged that President Hamid Karzai’s government was receiving bags of cash from Iran, prompting the US to voice concern about its potential “negative influence.”

Southern Afghanistan — particularly the provinces of Helmand and Kandahar, where the Iranian was captured — is seen as the Taliban’s home turf and is at the heart of the war in Afghanistan between international forces and the Islamist militants.

The United States last year said it was sending 30,000 extra troops to Afghanistan, raising its numbers there to 90,000 and the overall international presence to 140,000.

It is likely to start a limited withdrawal of troops from July 2011, with Afghan troops and police due to take over responsibility for their country’s security in 2014.