AFP: US Secretary of State Hillary Clinton on Wednesday denounced an alleged Iranian plot to assassinate the Saudi ambassador on American soil as a “dangerous escalation” by Tehran. 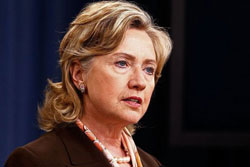 WASHINGTON, October 12, 2011 (AFP) – US Secretary of State Hillary Clinton on Wednesday denounced an alleged Iranian plot to assassinate the Saudi ambassador on American soil as a “dangerous escalation” by Tehran.

As the United States began individual consultations with UN Security Council ambassadors — a possible precursor to international condemnation or some other action — Clinton reiterated that Iran must be “held accountable.”

The plot is “a flagrant violation of international and US law and a dangerous escalation of the Iranian government’s long-standing use of political violence and sponsorship of terrorism,” Clinton said.

“We call upon other nations to join us in condemning this threat to international peace and security,” the top US diplomat told journalists at a think-tank in Washington. “Iran must be held accountable for its actions.”

Clinton said the plot was “directed by elements of the Iranian government,” and said this “kind of reckless act undermines international norms and the international system.”

The US has “increased our sanctions on individuals within the Iranian government who are associated with this plot and Iran’s support for terrorism,” she said.

Clinton’s spokeswoman Victoria Nuland said the United States is “looking for countries to join us in increasing the political and economic pressure on Iran,” adding the political pressure would involve condemning Iran.

She added that the United States was putting renewed emphasis on sanctions given that a number of countries are not fully enforcing the existing ones.

The United States would like “everybody redoubling their efforts to enforce UN sanctions, national sanctions, regional sanctions and to take more sanctioning measures,” Nuland told reporters.

Iran warned the United States to shy away from any confrontation over what Tehran called baseless allegations that it plotted to kill the Saudi ambassador to Washington.

The US Justice Department on Tuesday named two Iranian suspects as Manssor Arbabsiar, 56, a naturalized US citizen, and Gholam Shakuri, said to be an Iran-based member of the Quds Force, a unit of the Iranian Islamic Revolutionary Guard Corps.

Shakuri remains at large while Arbabsiar was arrested on September 29 at New York’s John F Kennedy International Airport and appeared in court Tuesday in Manhattan. His lawyer said he would plead not guilty.

US officials say the case was broken open by a paid US source posing as a member of a Mexico-based drug cartel, which the defendants believed would provide explosives for the attack on the ambassador.

Mexico said it cooperated closely with the US investigation, and said Arbabsiar was denied entry and put on a flight to New York, where he was arrested by US authorities.

Nuland also said that Clinton’s deputy William Burns earlier Wednesday briefed ambassadors from countries around the world about the plot and the indictment.

The State Department also sent messages to all US ambassadors and chiefs of missions overseas to brief them on the plot.

Executions on the rise in Iran

In a private session of the Iranian Majlis (parliament)...