Daily Telegraph: David Cameron accused the Iranian regime of supplying weapons for the Syrian onslaught on democracy protests yesterday as Russia’s foreign minister warned that the West was set on a path to war with Tehran.

David Cameron accused the Iranian regime of supplying weapons for the Syrian onslaught on democracy protests yesterday as Russia’s foreign minister warned that the West was set on a path to war with Tehran. 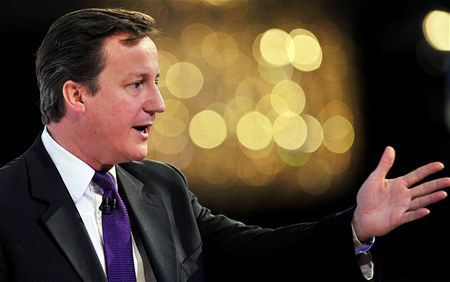 The Prime Minister revealed that British officials had been told that weapons shipments from Iran to Syria had been intercepted by Turkey and that intelligence reports confirmed that Hizbollah, the Iranian-backed Lebanese movement, was actively involved in the slaughter of Syria.

“There is now growing evidence that Iran is providing a huge amount of support,” he told the House of Commons. “There have been interceptions of some shipments by Turkey which are particularly interesting.

“People should also know that Hizbollah is an organisation standing up and supporting this wretched tyrant who is killing so many of his own people.”

Mounting frustration in Whitehall over the role of foreign support for the Syrian regime to suppress the uprising has seen the Government, along with other Western powers, switch tactics in recent days.

After deferring to an Arab League initiative to send in monitoring teams to defuse violence, diplomats now want a UN Security Council resolution condemning the regime.

William Hague, the Foreign Secretary, said a Syria resolution was “long overdue”. Officials said Mr Cameron was keen to draw clear distinctions between those countries opposed to brutality and those that were complicit.

However Russia made clear it had drawn a line against the Western barrage of criticism of Iran as Sergei Lavrov, the foreign minister, declared he was doing all he could to resist military action against Iran to prevent the spread of nuclear weapons.

Mr Lavrov said the Western assertions that all options are on the table underpinned accusations against Iran and were responsible for sectarian clashed in countries like Syria. This, he said, was pushing the region closer to confrontation.

“As for the chances of this catastrophe happening, you would have to ask those constantly mentioning it as an option that remains on the table,” Mr Lavrov said. “I have no doubt in the fact that it will only add fuel to the fire of the still-simmering Sunni-Shia conflict. And I do not know where the subsequent chain reaction will end.”

“The mounting escalation and persistent tensions might end up in an adventure with unpredictable consequences or in an unwanted military confrontation,” he said.

Saudi Arabia’s promises to make up any supply gaps caused by the European and American campaign against Iranian oil exports has seen Iran threaten to block the Straits of Hormuz.

However Ehud Barak, Israel’s defence minister, appeared to withdraw one pressing threat against Iran by stating that a military strike was “very far away”.

Israeli officials have said they believe that tough economic measures against Iranian could force the regime to abandon its pursuit of a nuclear weapon.

British and European officials dismissed Iranian claims that it was in talks to resume negotiations with the permanent five Security Council members and Germany on its nuclear work.

“Iran is chasing headlines and pretending that it is ready to engage,” said a Western diplomat. “If it really is ready to sit down without preconditions the (six powers) would do so. Sadly, at the moment, it seems more interested in propaganda.”