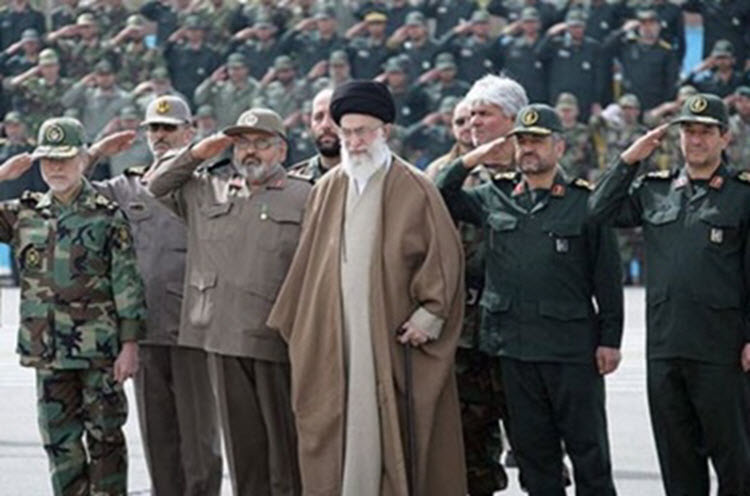 London, 6 October – On October 4, the National Council of Resistance of Iran (NCRI) reports on the continuing factional feuds over the stalemate of the Iranian regime policies in the region.

He went on to say, “In Syria, the people revolted and the Arab spring has arrived behind the walls of Bashar al-Assad’s palace, but the Qods Force officials proudly say that Bashar al-Assad had no more than ten thousand troops and we kept him (in power); against whom? The Syrian people! This is wrong; (that’s how) the people of Syria became our enemy,” adding that, “We have the worst situation in Syria and deep hatred is created (against Iranian regime).”

In a previous statement, Khazali said, “If it wasn’t for the actions of Qassem Soleimani, Daesh (ISIS) would not emerge in Syria… Eight-year war (with Iraq) was not enough, now we have been fighting in Syria for five years.”

Sources and websites affiliated with Khamenei’s faction and IRGC have published their reaction to these statements on the cyberspace and social media, “Mehdi Khazali has a vehement stance against Qassem Soleimani and introduces him as the main culprit for the war in Syria and the rise of Daesh (ISIS). He considers Khomeini and Khamenei and the IRGC responsible for all the problems of the country and the region. It is not surprising to hear such words from such a person!”

Meanwhile, on October 5, the NCRI reports that Yadollah Eslami, a former member of the Iranian regime’s parliament, has brought the Syrian war into question, calling it the “Syrian Vortex.”

On October 3, ‘Baharnews’, the state website, published an article entitled, “Should remaining Assad in power be at the expense of a country?”

On his Twitter account, Yadollah Eslami posted, “What is going on in Syria? Why the Syrian people should have such a fate? What’s the good of the widespread killing, displacement and homelessness of the Syrian people?”

He says that the Iranian regime’s support from Assad “is remaining Assad in power worth the destruction of his country and a widespread ethnic and religious war?”

This former member of the parliament also asks, “What role will Iran-Russia alliance have in the future of Iran and the region? What impact will Russian bombardments in Syria have on the way the Syrian people look at Iran?”

The Iranian regime’s huge investments in the Syrian war also come into question as Yadollah Eslami points out, “will the amount of investment Iran has made in Syria, ranging from manpower to financial support and resources, bring the expected benefits for Iran?”  He also asks, “will it be easy for Iran to get out of  the Syrian vortex?” adding, “has Iran’s alliance with Russia in the Syrian war been based on foresight and national interests? Has this decision been made based on a consensus among the country’s leaders and administrators?”

“There is a broad range of such questions and although some try to give simple answers and move on but they know that what they say is not an answer. The consequences of (Iran’s) presence in Syria will not be as simple as some say. Frenzies will fade away and wise questions will take their place. Then it will be time for answering!”, this former member of parliament concludes.

AFP: Iran has freed two female lawyers who were...