Is Soleimani the Bin Laden of Iran? 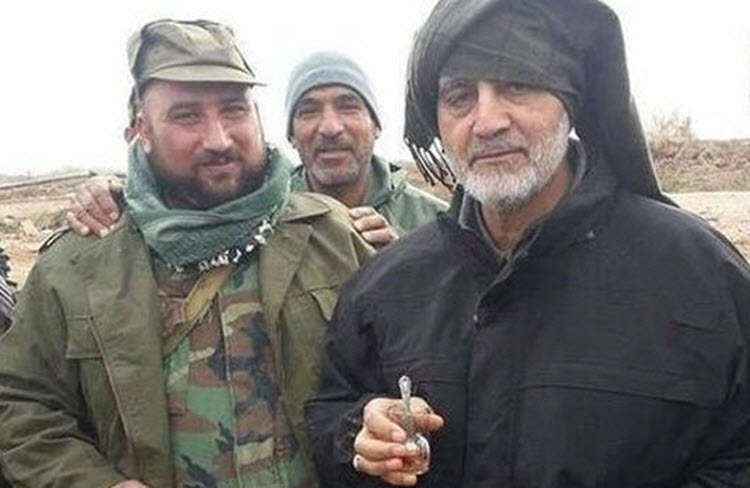 London, 9 Mar – Qassem Soleimani is known all over the Middle East as Iran’s most dangerous man. He takes pompous photos of himself and his soldiers on the battlefield in various countries including Lebanon, Yemen, Iraq and Syria.

He is Iran’s second man – only after Ali Khamenei, the country’s supreme leader. As a close confidante of Khamenei, Soleimani has a big influence over foreign policy.

He started off as a construction worker and is now in charge of the country’s Quds Force. The Quds Force is part of the Islamic Revolutionary Guard Corps (IRGC) – the country’s most important military organisation that enforces Iran’s repressive and suppressive policies.

Soleimani is in charge of operations that take place outside Iran, in particular training, arming, financing and organising Iran’s militia groups. He also provokes unrest abroad so Iran can advance in its ideological plans and he organises the assassinations of political figures and powerful Iranian dissidents abroad.

Soleimani favours offensive tactics instead of defensive ones and has been sanctioned by the UN Security Council, the US and Switzerland. The Quds Force was once designated by the US as a supporter of terrorism and Soleimani was on the US Specially Designated Global Terrorists list.

Yet, somehow, Soleimani is able to operate, travel, violate sanctions and enjoy more power than ever.

The Quds Force has been involved in (failed) plots to bomb foreign embassies in the US and to assassinate the Saudi Ambassador to the US. It has also been revealed that the Quds force was behind the assassination of Lebanon’s Sunni Prime Minister Rafiq Hariri. It may also have had involvement in the 9/11 attacks in New York.

It has alliances with other groups such as Al-Qaeda and experts believe that Iran provided a safe place for some of its leaders. This would make sense seeing as Al-Qaeda has never attacked Iran.

A former US Navy aviator, Christopher Harmer, told the New York Times that Soleimani is “a more stately version of Osama Bin Laden”. However, Soleimani, unlike Bin Laden, operates under the legitimacy of his country and government.

Soleimani and the Quds Force select foreign leaders and politicians to influence and eventually control. Many blame the death of women and children in Yemen, Syria, Bahrain and Iraq on Soleimani.

The international community should take responsibility and condemn Soleimani and the Quds Force for its terrorist actions and crimes against humanity abroad. Their crimes need to be taken to the International Criminal Court (ICC) and the UN Security Council should impose sanctions.

Mahindra to sell tractors in Iran